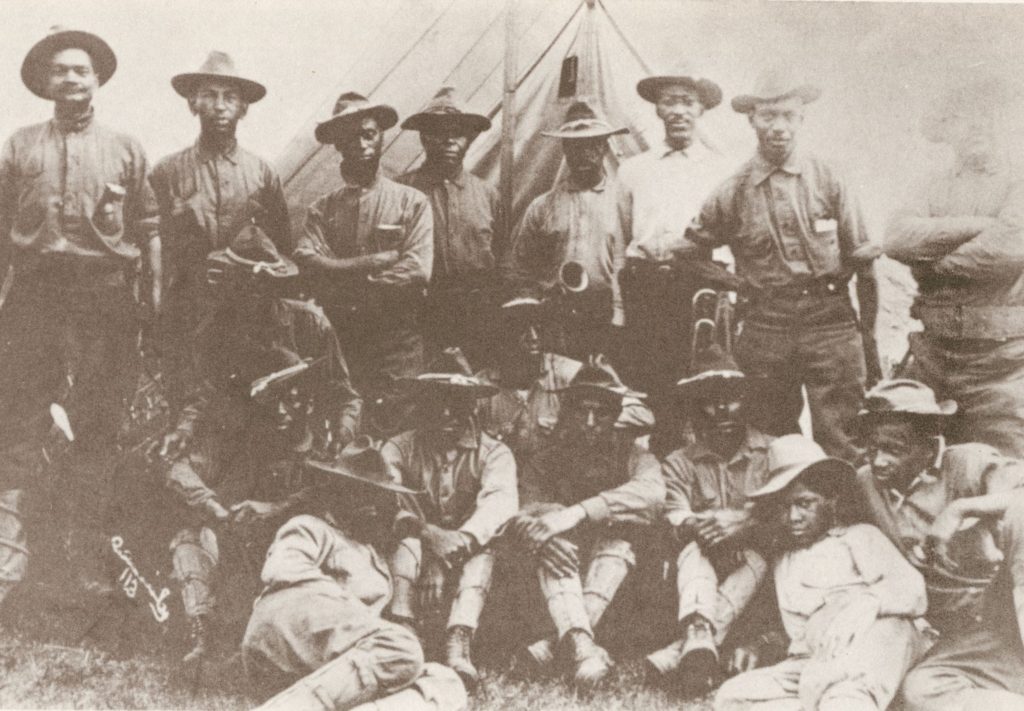 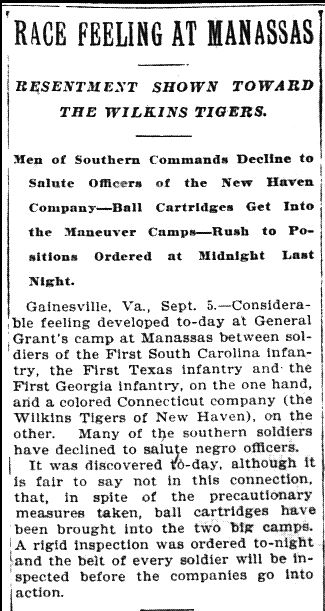 An item titled “Race Feeling at Manassas” in the New Haven Daily Morning Journal and Courier of September 6, 1904 should alert historians to the fact that the story of the Black Connecticut guardsmen has not yet been fully told.  It has long been known that in the time between the Civil War and the First World War, African American males in Connecticut had opportunities that were uncommon in much of the United States.  One significant example of this was the opportunity for Black residents to serve with the Connecticut National Guard (CNG).  Serving with the CNG did not necessarily mean, however, that Blacks were officially in the CNG.

Even though they were considered separate, there were times when the Black companies were called to serve alongside the regular CNG units.  This occurred when the CNG participated in maneuvers and war games that were held at Manassas VA in September 1904.  Ernest Saunders recounts the details of the event in his book Blacks in the Connecticut National Guard (1977):

The author goes on to say that “The entire exercise of nine days was considered a success.  The officers and men from Connecticut were indebted to the officers and men of the Fifth United States Infantry for many courtesies and numerous helpful hints as to their duties.”  Saunders further asserted, “The conduct of the entire brigade was such as to call forth commendation from all” (Saunders, page 26).  Saunders’ positive assessment, while undoubtedly true in part, was not the consensus.  First Separate Company for example, faced significant challenges at the camp.

The New Haven Journal and Courier article tells part of this story.  According to the September 6, 1904 piece, white Southern soldiers refused to salute Black officers and despite the restriction against live ammunition in camp, ball cartridges were ominously found and confiscated.  The ball cartridges were just one symptom of a general atmosphere of racial intolerance commended by Southern political leaders.  According to an article in the New York Tribune, the governor of Georgia, Joseph Terrell, praised the refusal of a Georgia soldier to salute an African American officer at the camp.  The former governor of Georgia, Allen D. Candler, was quoted in the same piece as saying that “any Yankee who thinks a Georgia soldier will salute a negro is a d__n fool.”  When the maneuvers were over, the tension between black and white troops was diminished but not gone.  The Alexandria Gazette and Virginia Advertiser of September 12, 1904 reported that at the final review of the troops, “the Southern men simply withdrew,” rather than mingle with the First Separate Connecticut Infantry.  Although the Manassas maneuvers ended without a serious conflict, they presaged the race tension and discrimination the First Separate Company would face when it was called up for duty in the First World War.

When the U.S. entered the war in April 1917, it did not have a large Army prepared for war.  Among the organized units that were ready for training were the state National Guard units, which included the “colored” National Guard units.  The First Separate Company of Connecticut was called up on July 31, 1917 (Scott, pages 33-34).  On January 1, 1918, combined with several other “colored” National Guard units and 250 black draftees, First Separate Company was now designated Company M, 372nd Regiment, 92nd Division, U.S. Army (Scott, page 239; Saunders, page 42).  On April 14, 1918, the 372nd Regiment arrived in France, and was attached to the French Army.  Scott notes their good luck: “It was the fortune of the 372nd Regiment, U.S. Army, to be brigaded, together with the 371st Infantry, throughout its entire period of service overseas, with the 157th Division of the French Army, the famous ‘RED HAND” Division’” (Scott, Page 239).

Although the black troops were attached to the French Army, the U.S. Army advised the French that the manner in which the French military and French civilians treated the black troops would be of concern to white Americans.  Here is an excerpt from a memo sent to French officers, on behalf of the American Expeditionary Force (AEF) signed by Col. J.A. Linard, Chief of the French Mission at the AEF:

The harsh recommendations of the AEF were not welcomed by the French.  According to Saunders, when the document was discovered by the French people, they “collected and burned as many as could be found” (Saunders, page 69).  The French considered it an affront to the men who had come to save France from the Germans.

The Black soldiers, themselves, answered the AEF’s disparaging memo in action.  One of the best accounts of the courage and determination of the men of the 372nd is found in the regimental records for September 28 through November 10, 1918:

Clearly, in the fall of 1918, the men of the 372nd, proved themselves over and over.  Their valor was recognized in a famous order issued by General Goybet, Commander of the (French) 157th Division.  In that order, General Goybet paid tribute to the Black soldiers who served under his command.

General Goybet’s tribute was high praise, but it could not fundamentally change the country to which the troops would return.  Racial discrimination was the norm in most of America, and especially egregious in the South under Jim Crow laws.  Black Americans also knew that mob violence directed against them, such as lynching, could erupt at any time.  While there has never been any record of lynching in Connecticut, the Guardsmen returning to Connecticut would have been aware of what was happening in other states.  In May 1919, the Norwich Bulletin, for example, published an editorial titled “Our Own Barbarity,” in which they pointed to the irony of a war for democracy abroad and atrocity in the American South.

Fortunately, from the point of view of W.E.B. Dubois, the war had well-prepared African American veterans to meet the challenge of racism at home.  Despite the persistence of racism and discrimination, the returning Black soldiers, by virtue of the wartime experiences that changed them, returned with new pride and self-confidence.  An item in the August 1919 issue of The Crisis speaks of this change:

DuBois, then, saw the experiences of the First Separate Company and other African American units as opening up the era of the New Negro, an era in which true civil rights could be won.

The recent digitization of by the Connecticut Digital Newspaper Project of the New Haven Journal and Courier, under all the variant titles that it carried from 1880-1908, has already helped us to enrich the story of the state’s African American guard.  Issues from January 1895 to June 1902 are currently online and additional years of publication will be appearing over the course of the fall and they, too, should be searched for anecdotes that will fill out the history of Connecticut’s African American community.

To explore the topic of the First Separate Company of 1880-1918 in online Connecticut newspapers, go to http://chroniclingamerica.loc.gov/, click on the “Advanced Search” tab, select “Connecticut,” select the years “1880-1918,” and enter these terms into the boxes called “with the phrase” or “with ALL the words.”

* According to Saunders, the “Wilkins Guard” was established in 1869.  This unit was not officially part of the CNG.  In 1879, Connecticut established the Fifth Battalion of the CNG, composed of four independent companies (A, B, C and D) of Black guardsmen.  Company A was from New Haven.  In 1888, the Fifth Battalion was disbanded and only Company A and B (now known as the First Separate and Second Separate Companies) were retained.  On June 12, 1896 the state disbanded the Second Separate Company.  On July 3, 1899, First Separate Company was disbanded.  However, this was met with a public outcry against disbanding the last company of Black guardsmen.  On October 16, 1899, the First Separate Company was reinstated in the CNG . This company would continue under that name until January 1, 1918, when it was placed on active duty as Company M, 372nd Regiment, 92nd Division, U.S. Army.