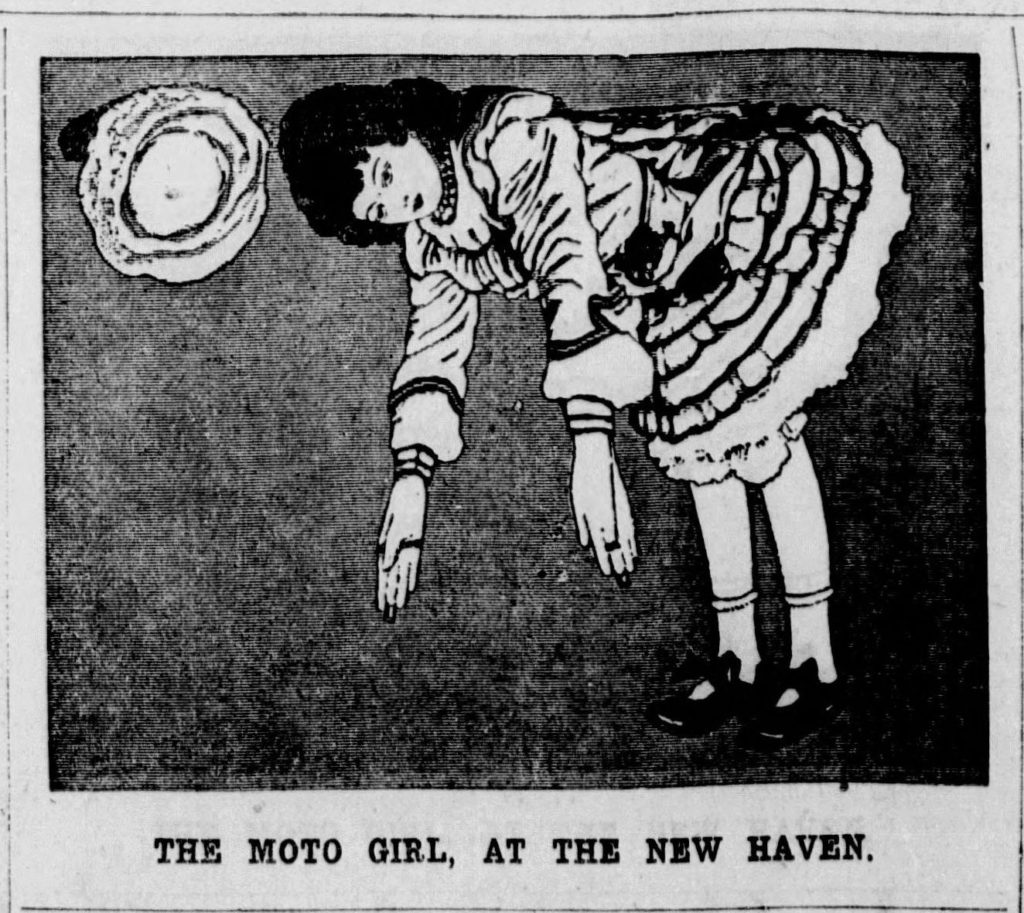 From March 16th to 18th in 1908, New Haven audiences were able to marvel at “La Moto Girl,” who appeared at the New Haven Theatre in an act anchored by Valadon, The Magician.  The Moto Girl was a “pseudo-automaton,” a diminutive young woman named Doris Chertney who was costumed to suggest that she ran on electricity and who performed as if she were an animated doll.  Wires ran from her heels to a socket and sparks flew off of her legs when she played the violin or carried out other amazing feats.  A March 14 entertainment page article in the New Haven Morning Journal-Courier promoted her appearance by retelling stories about her ability to fool, for three consecutive days, a panel of judges in a Berlin court into believing she was, indeed, a toy.

It seems that earlier audiences initially believed that the Moto Girl was really a robot with doll-like features, rather than human with the ability to convincingly move like a machine.  At first, the act was promoted as a “mechanical marvel.”  Indeed, there were many “fake” animated creatures in vaudeville in this period.  Such acts, like those in the silent films to come, induced a sense of the uncanny by blurring the line between the human and the machine in an age when industrial automation was transforming social relations.  By 1908, however, it seems that audiences were clearly going to see a human with an extraordinary ability to stay in character.  Less than a month after her New Haven visit, Doris Chertney reportedly stayed completely stiff and doll-like when, while being carried horizontally under the arm of her theatrical partner, Frederic Melville, they both crashed through a collapsing floor to land one story below on the theater floor.  Her self-control may have been enhanced by the medical condition known as congenital analgesia.  In an interview in Strand Magazine (Vol. 29, 1905), she was quoted as saying, “I never feel pain.  I hardly know what it means; and I never drink tea or coffee, so I have no nerves.”

The kind of entertainment that drew crowds in New Haven from 1880-1908 is well-documented in the newly digitized run of the New Haven Journal and Courier.  Around 30,000 pages of this important Republican newspaper are currently searchable in the Library of Congress historic newspaper database called Chronicling America and soon the 1908 coverage of Moto Girl will be online as well.  To search for earlier visits to Connecticut and related phenomena nationwide in the database, use the advanced search tool and the phrases “Moto-girl,” “Moto Girl,” “automata,” and “animated doll.”