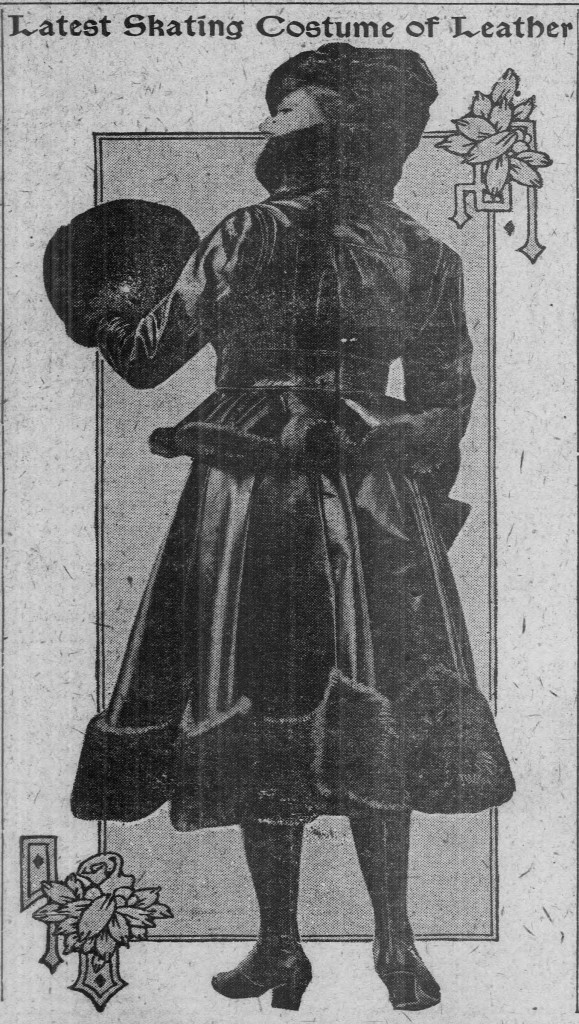 The Manhattan society ice skating craze of 1915 seems to have hit Connecticut hard.  This lovely leather skating costume was featured quite prominently on the fashion pages of the December 13 Bridgeport Evening Farmer of that year, occupying enough vertical inches to fill the bottom half of the page.  Reports of ice skating outings were also a regular feature of the society news.  We learn that the historic Brooklawn Country Club in Fairfield opened its pond to well-off youth on December 14, 1915 and was expected to be soon crowded with “the young flower of society” engaged in “the most exhilarating of winter sports.”  News about the skating of the upper crust, of course, contributed to this type of recreation becoming a mass popular entertainment as well.  For example, the Farmer reports that on Dec. 13, three thousand persons skated at Bruce’s pond beginning from 1:00 p.m. in the afternoon and many remained until late that night.

Further insight into the social role and roots of the fad can be gleaned by a syndicated feature that appeared in more than one newspaper found in Chronicling America in December of 1915 that was headlined “Dancing on Ice Skates the Latest:  Fashionable Society Now Busy with ‘Ice Teas’ and ‘Dansants a Glace’ and Not Enough Skating Rinks or Instructors to Meet the Demand.”  The feature begins by saying that “There is every indication that the new craze, which is already country-wide in extent, will be taken up by people of all ages, in all walks of life, with the same enthusiasm that has converted men, women, and children into fox-trotter and tango-experts during the past three or four seasons.”   The article also provides some context in which to consider the “Latest Skating Costume of Leather.”   All the costume makers and manufacturers of wearing apparel, it says, “have vied with each other in getting out attractive skating designs and the big retail stores have given considerable space in their advertising to the beautiful creations which have been made available for followers of the new craze.  .  .  . Indeed, it has been suggested that women may be tempted to take up skating in order to wear the new garments.  .  . ”

According to this article, four of New York’s most fashionable hotels were putting in ice-rinks for the use of their patrons, with the Waldorf investing a million dollars in the roof top version.  A Manhattan skating club was said to include the subscribers Mrs. John Jacob Astor, Mrs. Cornelius Vanderbilt, Mrs. Edwin Gould, and Mrs. Irving Brokaw.  The latter was married to the famous and wealthy socialite Irving Brokaw.  A Winter Olympics competitor, Brokaw was the author of a popular 1911 book called The Art of Skating.  In Chapter XI, he provided instructions for figure skating, or “dancing,” with partners, as well as many photos of beautifully costumed couples.  It might not be altogether accidental that the Brokaw family made its money in apparel. That Connecticut publishers maintained their interest in the Brokaws is clear from this 1917 article reporting on one of the couple’s “Luncheons on the Ice.”

Chronicling America is clearly a great resource if one is interested in studying Connecticut’s social and cultural history.