The Joan of Arc of Shelton, the Efficiency Man, the O’Brien’s, and Sidney Blumenthal 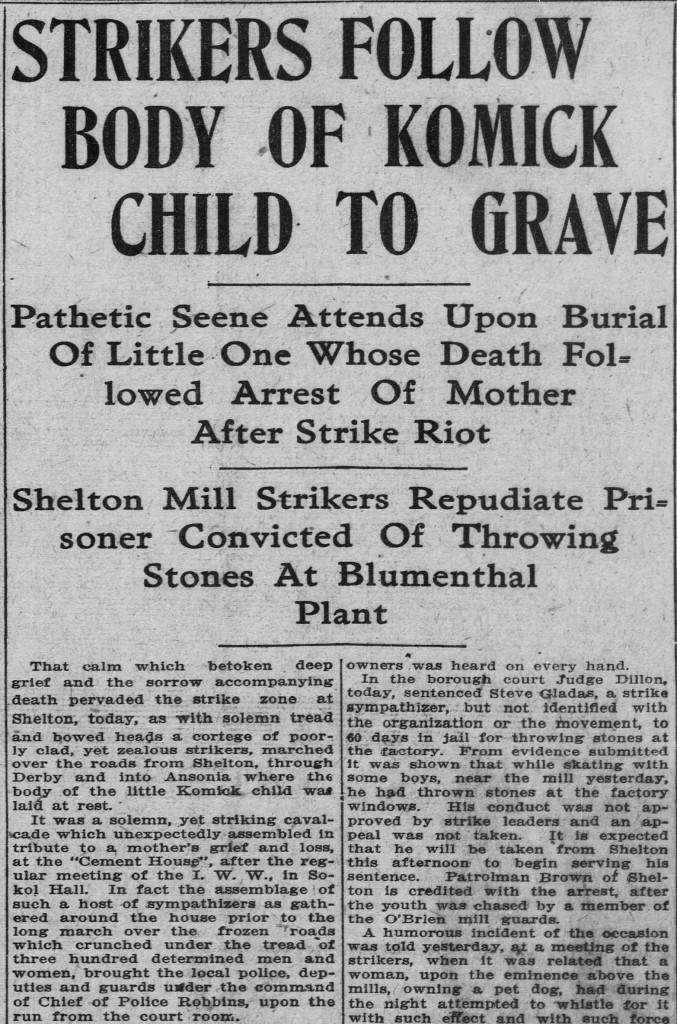 On January 3, 1914, three hundred men and women who were on strike at the Shelton mill of Sidney Blumenthal marched in a solemn funeral procession from the “Cement House,” up the Fourth Street hill, and then over frozen roads through Derby, onward to the Greek Orthodox Catholic church in Ansonia, and finally to the burial site for the infant Caroline Komick.  The procession carrying the little white coffin was headed by two marchers, Miss Louisa Mayers and Miss Victoria Felentak, who together carried a massive floral cross with the inscription “Branch No. 2, Local 528, Textile Workers of the I.W.W.,” the text marking the cortege as an assemblage of the  Shelton Industrial Workers of the World.

The casket was carried by Joseph Agojenska, John Fito, Basy Kaslo, and Peter Aznovik. They were followed by two columns made up of between 150 and 200 women in a division headed by Miss Catherine Jabolwski and the I.W.W. national organizer, Matilda Rabinowitz.  An equal number of men, including the infant’s father, Michael Komick, brought up the rear.  The funeral procession was said to be the largest ever witnessed in Shelton to that time and the death of Caroline was reported by the Bridgeport Evening Farmer as the first death directly attributable to the 1913-1914 strike at the Sidney Blumenthal mills.

The two-month old child had died of exposure and malnutrition when the O’Brien’s– the private strike-breaking force hired by the mill owners —manhandled and arrested Mrs. Michael Komick and her husband on suspicion of obstructing their capture of a striker resident in the tenement.  The detective agency had left the child behind in a freezing room.  The “Cement House,” itself, was described by the Farmer as offering a “good illustration of the manner in which the strikers live in Shelton,” consisting of three bare rooms, broken windows in which rags and other papers have been temporarily stuffed, a few beds and one kitchen stove from which all the heat required” must come.  The violence meted out by the O’Brien’s was extreme enough to warrant the condemnation of the mayor and other borough leaders.  The majority of the town was said to be sympathetic to the strikers.

On the day of the infant’s death, Rabinowitz, the I.W.W. organizer called the “Joan of Arc of Shelton,” had announced that her New Jersey organization had thwarted the importation of strike-breaking weavers from Passaic.  The strikers counted this as great victory against “The Efficiency Man,” one P. L. Garety [Gerety?], who had tried to organize the labor importation and who was held responsible for provoking the strike by introducing competitive work rules that lowered piece rates.

The 1913-1914 Shelton strike was one of dozens of work stoppages in Connecticut textile that occurred in the wake of the more famous Lawrence textile strike of 1912 and the legendary Patterson silk strike of 1913.  I.W.W Local 528 was defeated in Shelton, but its efforts did result, directly, in the modest reform of wages paid out weekly, and, indirectly, in an experiment in “industrial democracy” based on scientific management theories that industry hoped might dampen labor militancy.

In the 1920’s, Sidney Blumenthal embraced the scheme of John Leitch, who sought to restore harmony between employer and employee with the establishment of a system of factory “governance” that included a management Cabinet, a Senate of department heads and foremen, and a House of Representatives elected by mill employees.  It was this later effort that contributed to the reputation of the Blumenthal mill as a progressive workplace.  This reputation allowed the social photographer Lewis Hine to collaborate in the 1930’s with Blumenthal on the photo portfolio, “Through the Threads: An Interpretation of the Creation of Beautiful Fabrics by the Shelton Looms.”

The Bridgeport Evening Farmer issues newly digitized and uploaded into Chronicling America will make the earlier prewar history, as recorded on the spot by reporters sympathetic to labor, more easily accessible to historians of the tumultuous history of the New England textile industry.

Thornton, Steve. A Shoeleather History of the Wobblies:  Stories of the Industrial Workers of the World (IWW) in Connecticut, 2013.  State Library catalog record:  http://www.consuls.org:80/record=b3716919~S1