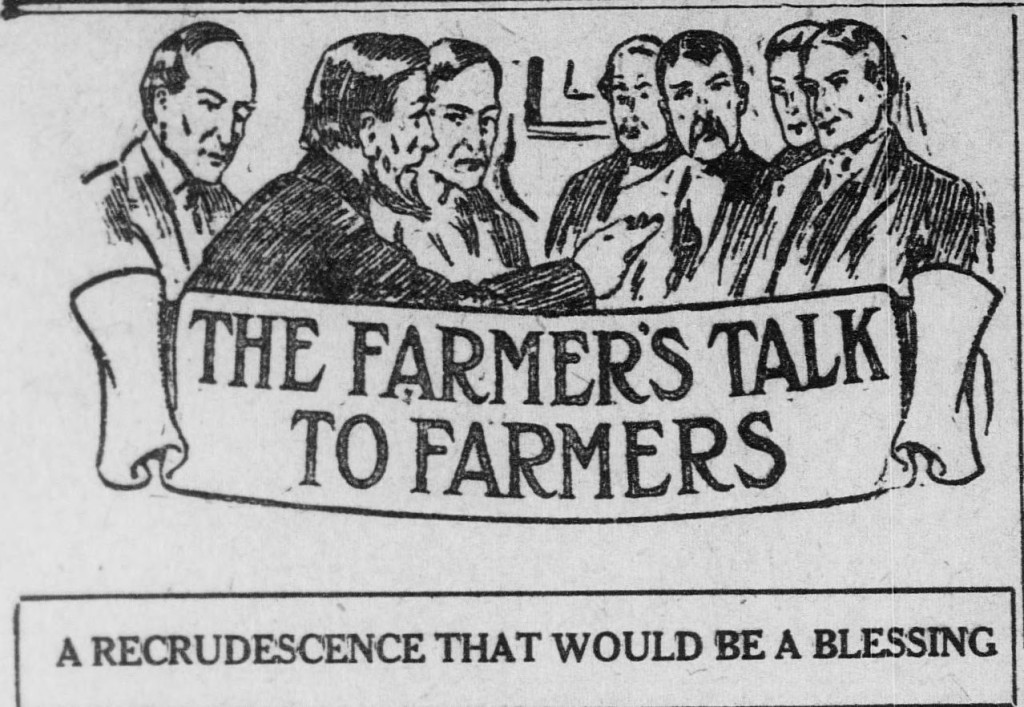 Pico and microhydro are hip concepts today in the field of renewable energy. Who has not dreamed about the possibility of powering the homestead through solar and small water? As this Earth Day approaches, it is interesting to note that the idea of reviving the use of small streams as rational energy-producing alternatives was current in Connecticut nearly 100 years ago. On December 23, 1921, the Norwich Bulletin columnist who wrote “The Farmer’s Talk to Farmers” intoned:

For the last half-century or more the controlling tendency of American life has been to do things in a big way, just for the sake of bigness. Quality work has been ignored for the sake of quantity output. Value-giving has been supplanted by profit-taking.

The specific problem that exercised this columnist was the failure to use the water power of the eastern states. The old flour mills on Connecticut’s streams, although they produced wheat flour with “all the food values of the wheat-berry” instead of “wheat dust,” he said, were not coming back due to simple economics. That should not mean, he argued, that the era of using Connecticut’s small streams efficiently was over. In the era of electric power, the Farmer argued, the use of water power from small streams should be reconsidered. Small but long streams with a real descent, he explained, could supply ten or twenty horsepower at each of a dozen or so points, that united, could add up to 120 to 240 horsepower. (One hydraulic horsepower = 745.699 Watts = 0.745699 kW.)

How many Connecticut streams fit the bill for today’s pico and microhydro schemes? I am not sure but I have linked below to a few government sources of pertinent information. Here is the Farmer’s thought, in some detail: 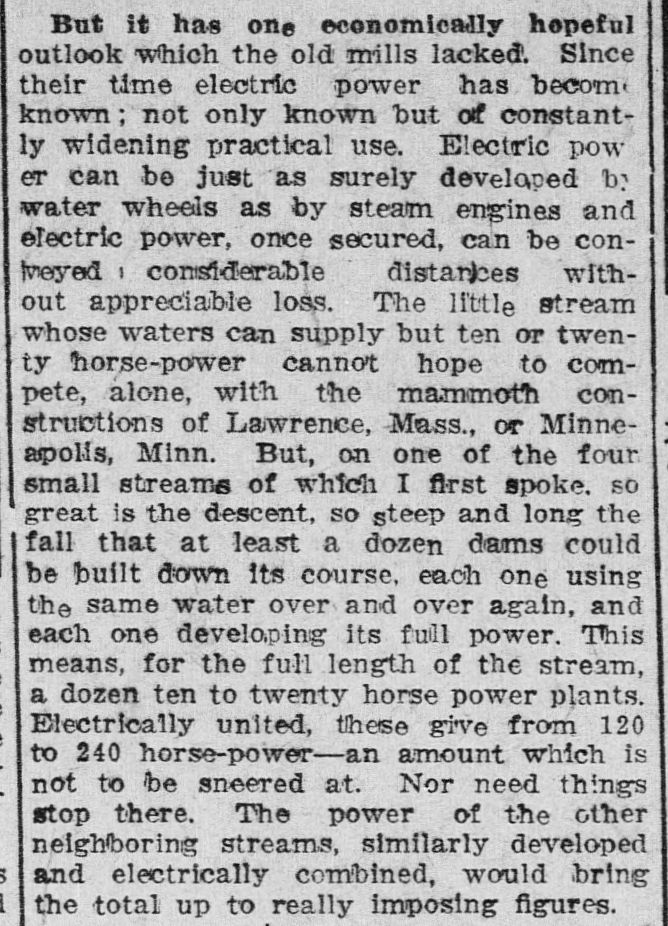 The Farmer admitted that “It is not likely that the little old woolen mills and grist mills and saw mills will be reconstructed. But there is a growing hope . . . that once used, now wasted water power of these and ten thousand similar streams all over the east will eventually be reconstructed for human service.”

The context of this farmer’s vision was the relative depopulation of the farms in Connecticut, a depopulation which the History of Connecticut (1962) attributed to the decision of local financial institutions to put their funds into investments that paid higher interest. Agricultural investments returned 3%. Investments in mines, railroads, and mortgages on real estate paid out 8 to 12%. The difference radically reshaped the state’s landscape.

The isolation of those left on the land was such a serious social issue during this period that sociologists and political thinkers initiated a reform effort known as the Country Life Movement. We understand, then, why the Farmer concluded in a wistful tone, “Whatever use is made of these innumerable small water powers will serve to bring back to country living with its accompanying sanity and wholesomeness some of those who are now helping to congest city purlieus.”

The full article can be retrieved via Chronicling America, the historic newspaper database of the Library of Congress. The Connecticut Digital Newspaper Project has contributed a run the Norwich Bulletin (1910-1922) to this database and by summer will have added the issues from 1909 as well.