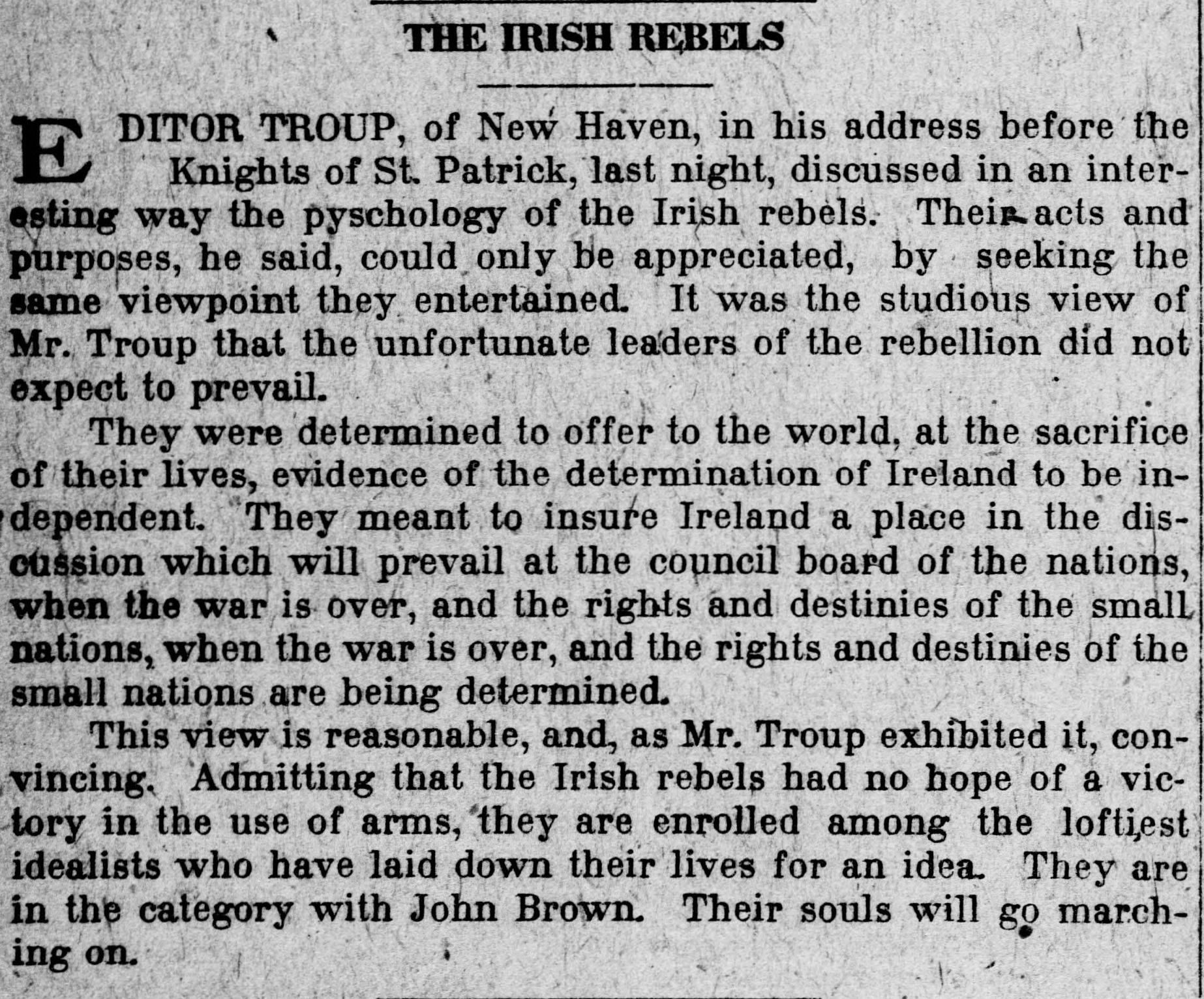 On March 20, 1917, the Bridgeport Evening Farmer ran an editorial praising the remarks before the Knights of St. Patrick of the editor of the New Haven Evening Union, Alexander Troup. Troup, I am guessing, was the son of Alexander Troup (1840-1908), who founded the Evening Union and was a central figure in Democratic Party politics in Connecticut. The elder Troup had been a friend of William Lloyd Garrison and his wife a friend of Susan B. Anthony; both were associated with labor reform. The younger Troup, seemingly of a similar political persuasion had, on the occasion of a St. Patrick’s Day address, spoken of the previous year’s Dublin Easter Rising in words sympathetic to the ear of the editors of the Bridgeport Evening Farmer.

Troup, it seems, took the opportunity of a year’s distance from event, to recast the rebellion as less a serious attempt to capture the state with arms than as a symbolic act of self sacrifice that could only be admired. Troup, the Farmer editorialized, was convincing in his argument that given that the rebels had no hope of victory, “they are enrolled among the loftiest idealists who have laid down their lives for an idea.” They should be considered, the Farmer continued, “in the category with John Brown” and their “souls will go marching on.”

Their sacrifice, the Farmer argued, was designed to make sure that when the European war was over and the treaties drawn up, Ireland would be considered along with the other small nations of the continent who deserved self-determination. Of course, it turned out to be a bit more complicated for Ireland.

The Irish in Connecticut, as in other urbanized states, had come to play an important role in Democratic Party municipal politics. The Farmer was an openly partisan paper, supporting the Connecticut Democrats and working to build its base among the working people of Bridgeport. The Bridgeport Democratic Party was almost exclusively Irish in makeup. James J. O’Neil, Sr., the founder of the labor newspaper called the Bridgeport Advocate and a state AFL organizer, was a fervent supporter of an independent Irish republic. And, of course, several of the figures executed for the Easter Rising were no strangers to the working class Americans to whom the Farmer hoped to appeal. For example, one of those put before the firing squad, James Connolly, lived in the United States, organized unions in New York City, and toured the country, including Connecticut, for the Socialist Party.

Troup and the Farmer were likely moved to change the lens through which the Easter Rising was viewed in the United States, because as the U.S. neared entry into the European war on the side of Britain, it became common to vilify the Irish rebels for taking arms from Germany. Inserted below is a political cartoon from the Rochester Herald newspaper, and currently held at the Library of Congress, that expresses this alternative point of view. 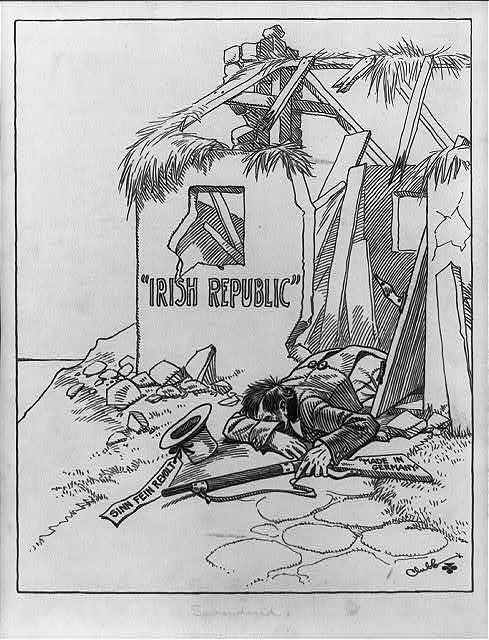 Each new issue of the Bridgeport Evening Farmer that is uploaded to the Library of Congress’ historic newspaper database, Chronicling America, adds another footnote to the story of Connecticut’s ethnic communities.

“Labor & Dignity: James Connolly in America,” a virtual display of a 2013 exhibition at the Center for Irish and Irish-American Studies at the Glucksman Ireland House, New York University.