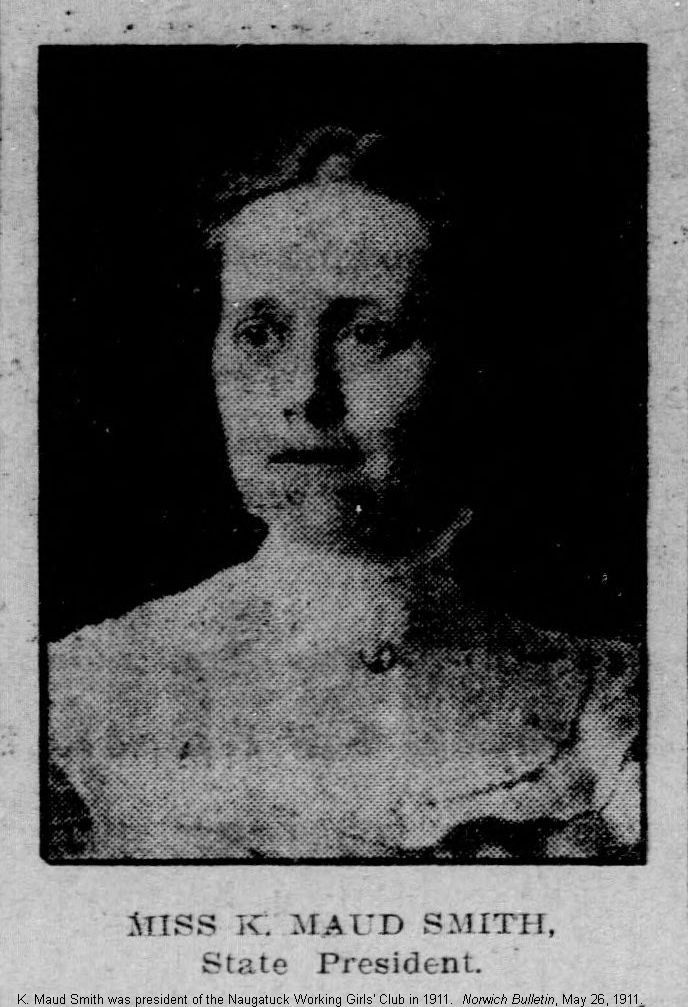 New stories that enrich the history of women in our state emerge as more and more issues of Connecticut’s historic newspapers are uploaded to the Chronicling America searchable database. A January 25, 1911 article in the Norwich Bulletin, for example, announces, “Jacob Riis Delivers Address before the Naugatuck Working Girls’ Club.” Jacob Riis, of course, was the famous muckraking journalist and social documentarian who in 1890 had produced How the Other Half Lives: Studies Among the Tenements of New York, but who were the working girls to whom he spoke? What was this organization and what was its relationship to the kind of settlement work associated with Riis and other social workers? What was its relationship to the women working in Naugatuck industry at the turn of the century? 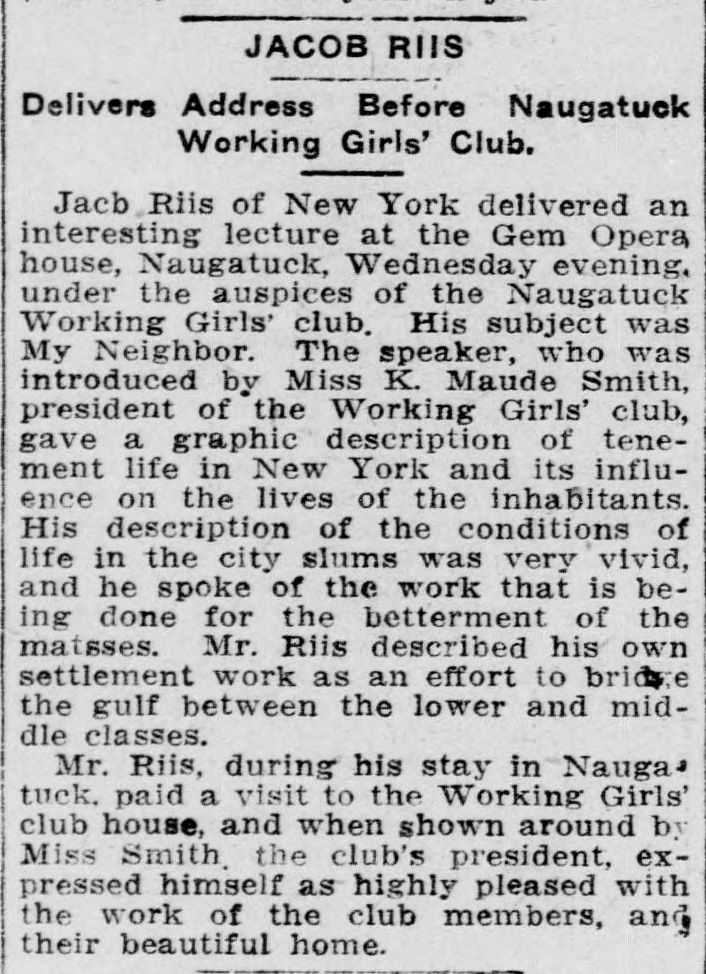 A Norwich Bulletin article from May 26, 1911, entitled “State Convention Here Today” says of a League of Women Workers event: “. . . it is expected that several hundred delegates from the seven clubs in the state will come. The six out of town clubs sending delegates will be the Alpha club and the Violet club, both of New Haven; the Waterbury Institute of Crafts and Industry, the Women Workers of Naugatuck, the Working Girls of New Britain, and the Girls’ Club in Derby.” It turns out to be no accident that the clubs were all from the centers of industry in the state and that the members, though the subjects of the redemptive efforts of a philanthropic and middle class layer of sponsors, seem to have used the clubs to assert the dignity of “working girl” as an identity, to discuss workplace problems, and to organize for old-age insurance, the eight-hour day, and other reforms.

According to Joanne Reitano, author of “Working Girls Unite,” an American Quarterly journal article (Spring 1984), the Working Girls Clubs were born in a New York City silk factory “out of a simple desire for companionship and self-improvement.” By 1885 it became necessary to found a coordinating group called the Association of Working Girls’ Clubs for eleven groups operating in New York, Connecticut, Massachusetts, and Philadelphia. They held national conventions at least until 1916. The members were mostly young, single women and it seems that the majority were factory workers, the second largest group dressmakers and saleswomen, and a smaller number telegraph operators, stenographers, and teachers. Reitano is convinced that the clubs consciously worked to break the stereotypes that elevated the young women who did retail work or domestic work over those who did factory work, demanding respect for all who work for their daily bread. She is also convinced that they facilitated a genuine improvement in the members’ lives and strived to foster members’ political/organizational skills.

This latter assertion seems borne out by the speech given by a Maud C. Johnson of the Bristol, Connecticut Laurel Club at the 1916 national convention. In her talk, Johnson urges the convention attendees to ask themselves, “Does every member have an opportunity to develop her own individuality, or are her enthusiasms dampened and her ideas neglected in favor of the ideas of some person who has already learned to lead?” (Proceedings, p.25) Reitano’s optimistic views about the Working Girls’ Clubs are somewhat revisionist. Others who study women and work, such as Alice Kessler-Harris, see the groups in a more one-dimensional way and as organizations designed to advance primarily protective and moralizing philanthropic agendas. Only further research will tell.

The digitization of Connecticut newspapers will allow future scholars to find the names of the dozens of local “working girls” recorded in many articles over a period of years and attach those names to diary accounts, involvement in labor organizing drives, later participation in other women’s clubs, in other political campaigns, and so on. In this way, historians of Connecticut will get closer to understanding just where the Working Girls’ Clubs fit in the larger story of women’s rights efforts in our state. Equally important, it will allow town and family historians to begin to identify more female residents and family members who made Connecticut’s “history from below.”

Note: Since August 2014, the Connecticut Digital Newspaper Project has added 61,000 pages of historic Connecticut newspapers to the Library of Congress’ database, Chronicling America.