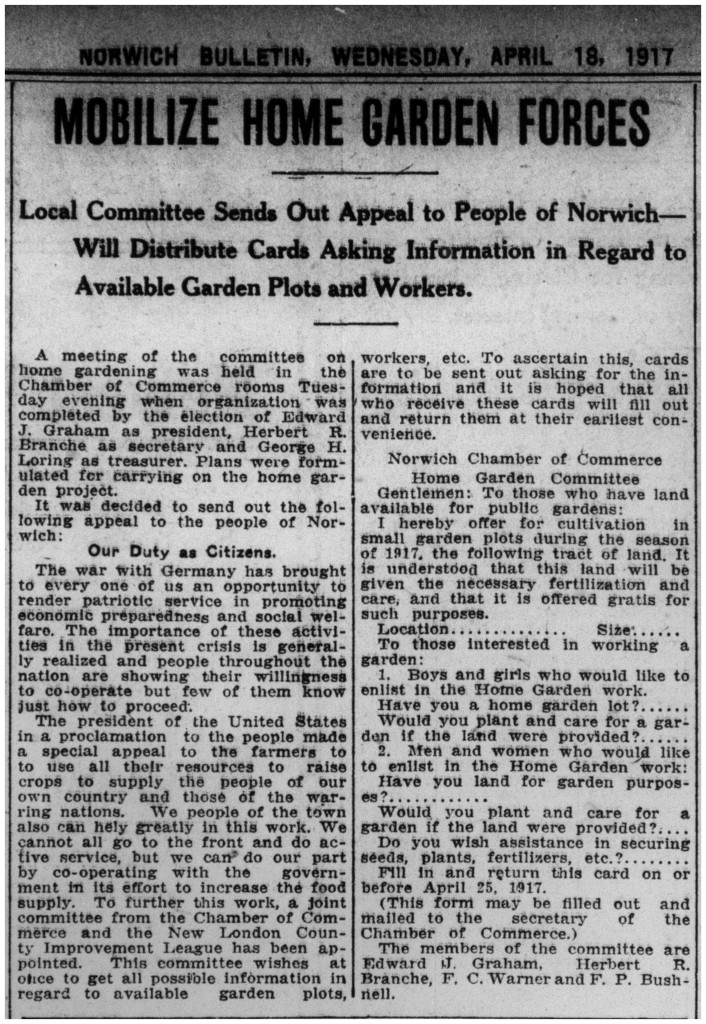 In 1919, Charles Lathrop Park wrote words that would likely get the attention of today’s advocates of food sovereignty, urban farming, sustainability, and the elimination of city center food deserts.  “Ambitious young men and women,” he said, “will not remain in the country where comforts are denied and where advantages of social life and education are few; but they will be glad to farm in the city.”  He was of the opinion that the “victory garden” had opened the way to abundance. “By this means almost everyone becomes a food producer,” Park enthused (Park, War Garden, 116).

Park was the timber tycoon, conservationist, and President of National War Garden Commission who authored the most famous of the federal government books, pamphlets, and newspaper columns that taught the nation to garden, can, and dry produce during World War I.  As combat ended, he was moved to feed the hungry in a Europe that had not yet recovered from the destruction of the land and the loss of labor power that flowed from the war.

The local implementation of his vision during wartime itself is well illustrated in the Norwich Bulletin, one of the Connecticut newspapers currently being scanned for inclusion in Chronicling America, the searchable historic newspaper database of the Library of Congress.  As this April 18, 1917 article from the Bulletin suggests, Chambers of Commerce and civic organizations responded to national and Connecticut Defense Council efforts toward city gardening by taking over some of the most onerous organizational tasks.  This included finding land and mobilizing labor.  The 1918 Daylight Savings Law made it possible for factory workers to work a full day and go to a worksite plot or a home garden before darkness fell.  Park estimated that by 1918, over five million war gardens were created (Park, War Garden, p. 15).

Formed in 1917 and ended in 1919, the Council of Defense coordinated war activities in Connecticut during World War I. Its various committees dealt with the various areas of concern, such as food supply, fuel conservation, transportation, military and naval affairs and publicity. This link leads to the finding aid for the archives of the Council, and includes an historical note.

The State Library’s Recently Digitized Pamphlets About World War I and the Connecticut Food Supply Include:

Farms with livestock can help alleviate the food shortage by growing oats and barley, which require little work, instead of feeding corn to the livestock. (by Conn. Agricultural College for the Conn. State Council of Defense, Committee of Food Supply, 1918)

Young men should go to college as planned and also register with their local board to be automatically inducted into the Student Army Training Corps and become a soldier in the U.S. Army, with pay. (Conn. Agricultural College, 1918)

Activities of the Bureau, representing the Committee of Food Supply, Conn. State Council of Defense, the U.S. Dept. of Agriculture and the Conn. Agricultural College include surveying milk prices to form a basis for fixing a fair price, helping towns supervise home gardens, teaching home canning, and organizing a Junior Food Army to supervise boys and girls for producing and conserving food (by I.G. Davis, published by Conn. Agricultural College and U.S. Dept. of Agriculture, 1918?)

“Published as part of a program of the State Council of Defense, Committee of Food Supply” this pamphlet encourages keeping a small flock of chickens in the back yard to supply eggs. “If you are not keeping poultry… obtain a few birds and join the army of food producers.”