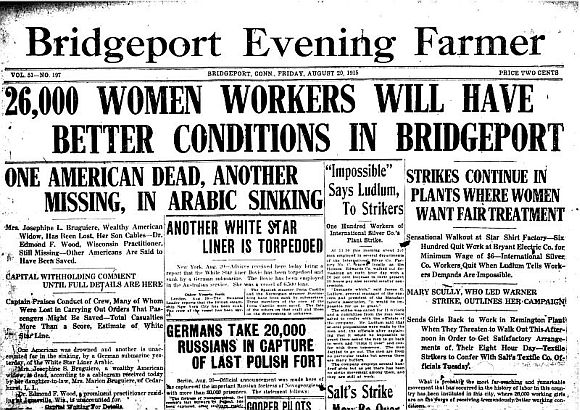 The social transformations wrought by World War I in the U.S. were profound.  One of the most dramatic involved the entry of tens of thousands of mostly young working women into jobs in the arms and munitions industry, as well as other non-traditional places of employment.  By 1915, Bridgeport, Connecticut had been transformed into a boom town supplying the belligerent armies in Europe.  Although workers streamed in from all over the East Coast, a severe labor shortage remained.  Suddenly, the corset factories of Bridgeport were in competition for female workers with the arms plants of Remington-Union Metallic Cartridge (UMC) and other companies eager to take full advantage of the new war-time economic opportunities.  By the late summer of 1915, around 5,000 women had been hired into the UMC operation.  Meanwhile, the International Association of Machinists, who organized the highly skilled male workers in the war plants, had sized up the situation and selected Bridgeport factories as the beachhead in a national campaign to shorten the workday with no loss in pay.  On August 17, 1915, the Bridgeport Evening Farmer reported that the UMC women, too, would join the eight-hour workday movement. 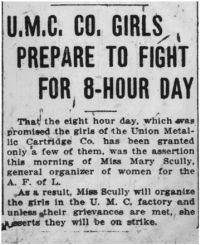 The entry of the women of Bridgeport into the fray changed the nature of the contest.  The machinists were first to understand that what happened in Bridgeport—a town so critical to the war effort that the New York Times dubbed it an “American Essen”—would set a precedent for highly skilled workers across the whole nation.  The IAM gave official status to a drive for the eight-hour day.  The female lower wage workers, however, transformed it into a mass movement.  After many of the machinists returned to work with their new benefits guaranteed, the semi-skilled and unskilled working women of Bridgeport took the stage, as seen in this headline from August 20, 1915.

Women made themselves central to making Bridgeport an “eight-hour day” town.  (They simultaneously ended child labor at the largest corset factory, as well.)  Bridgeport, for a time, became a place where reduced hours were established as the norm not only for machinists, but also for semi-skilled munitions workers, corset and shirt makers, department store workers, and the army of female laundry workers that grew up to provide clean clothes for the tens of thousands of newly arrived factory hands filling the rooming houses of the city.  When relations between the workers and the employers deteriorated in 1918, the U.S. government, hoping that industrial peace and uninterrupted war production could be achieved, directly mandated the standard eight-hour day for which women had campaigned.

The accounts of the summer of August 1915 in the Bridgeport Evening Farmer, one of the newspapers currently being digitized as part of the Connecticut Digital Newspaper Project, will be of interest to all students of women’s history, immigrant history, and local Connecticut history.  A brief survey of the headlines of other stories about the events of August 1915 suggest the confidence and high spirits with which groups of young women—many of them only teenagers, first generation or second generation immigrants from Hungary, Russia, Poland, and Italy, and conducting their meetings with translation—chose to become agents of their own destiny:  “Three Thousand Girl Strikers Parade to Great Mass Meeting” (August 17, 1915) and “Girl Strikers Hustle Men from Hall When They Hear of Double Crossing” (August 19, 1915).  A Farmer reporter said that at the August 16 mass meeting of the Warner Brothers corset factory workers around 1,200 employees “cheered and shouted and laughed and argued over the crisis,” buoyed by the fact that, as one woman put it, “This is the first time we had a chance to do anything in a bunch” (August 17, 1915).  So great was the cultural impact of these specific events, and the opening years of the war, in general, that the women’s page of the Farmer, on August 19, 1915, placed this editorial-type piece on women doing men’s jobs right alongside the fashion and homemaking items: 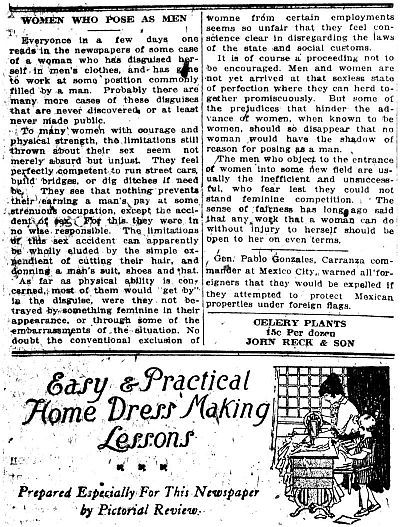 This article, so telling regarding the changing attitudes regarding women and work in the years around the First World War, is undoubtedly only one of many such texts that will be uncovered in the course the scanning and OCR’ing process.  The State Library’s newspaper digitization project is, of course, just beginning.  We hope to have some newspapers online early next year. Meanwhile, look for Connecticut content in other newspapers at the Library of Congress’ Chronicling America and in our own pilot project called Newspapers of Connecticut.