Connecticut’s Coverage of the Adoption of the 19th Amendment – #19SuffrageStories

In honor of the 100th anniversary of the 19th amendment going into effect on August 26, 1920, the CT Digital Newspaper Project would like to share front page coverage of the events from some of our newspapers. Connecticut papers covered both the ratification by Tennessee on August 18, 1920, the needed 36th state for the amendment to become law, as well as the signing of the law by U.S. Secretary of State Colby on August 26, 1920. The date of the second event has also been established as Women’s Equality Day, which was first celebrated in 1972.

Below you will find front page coverage from several Connecticut newspapers on suffrage for women becoming law, including the New Britain Herald, Connecticut Western News, The Connecticut Labor Press, Norwich Bulletin, and The Bridgeport Times and Evening Farmer.

An important note about the 19th amendment – while in principle it granted all women the right to vote, it did not actually guarantee that right to women of color. Just as state laws and policies, such as poll taxes and literacy tests, had purposely prevented men of color, other males from minority groups, and some poor white men from voting, they also excluded women in those same groups after the 19th amendment became law.

First up is front page coverage in the New Britain Herald on Tennessee ratifying the 19th amendment on August 18, 1920. See in the full issue on Chronicling America here. 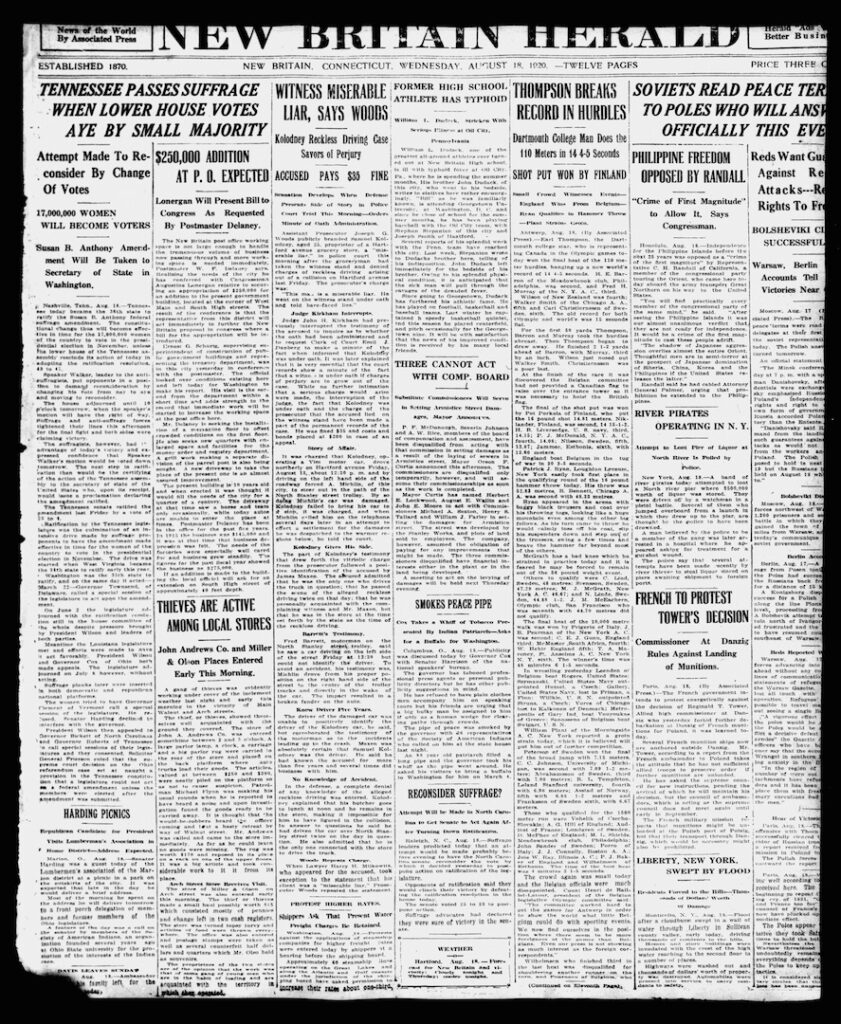 The following week the New Britain Herald also had a front page story about U.S. Secretary of State Colby signing the amendment into law. See the full issue here. 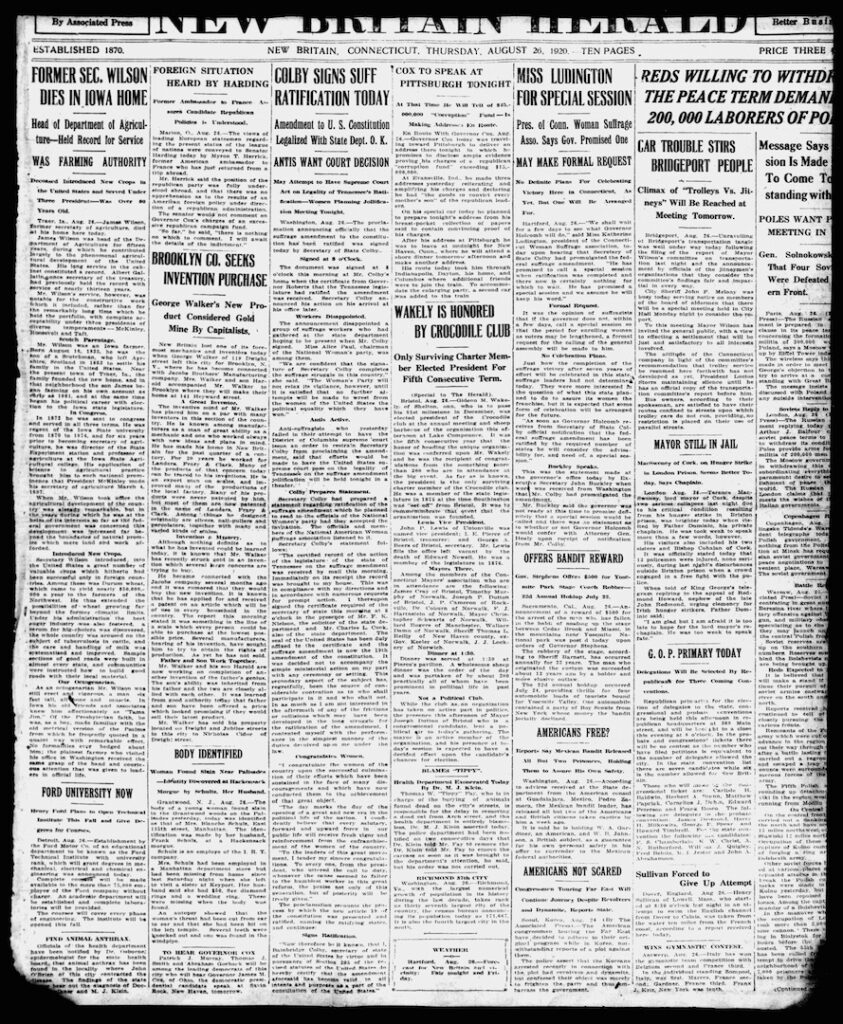 Connecticut Western News also carried a front page story on August 26, 1920 that discussed the long fight towards suffrage. And they had a follow up story on September 2 discussing what might be involved in the process for women to become voters. See the August 26th issue here, and the September 2nd issue here. 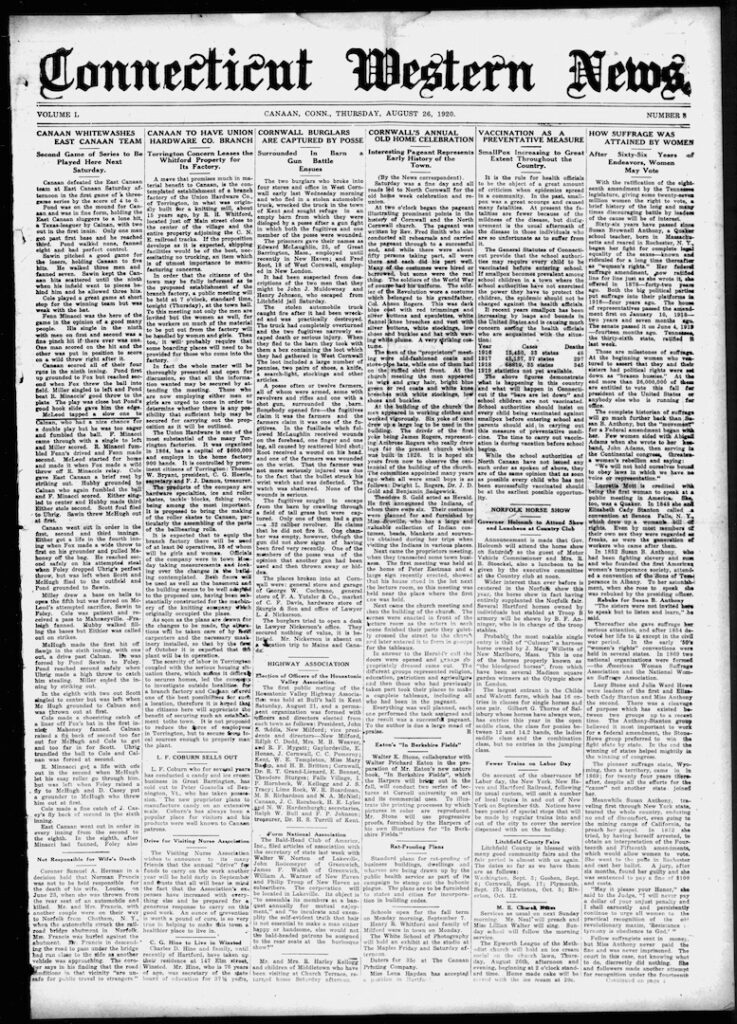 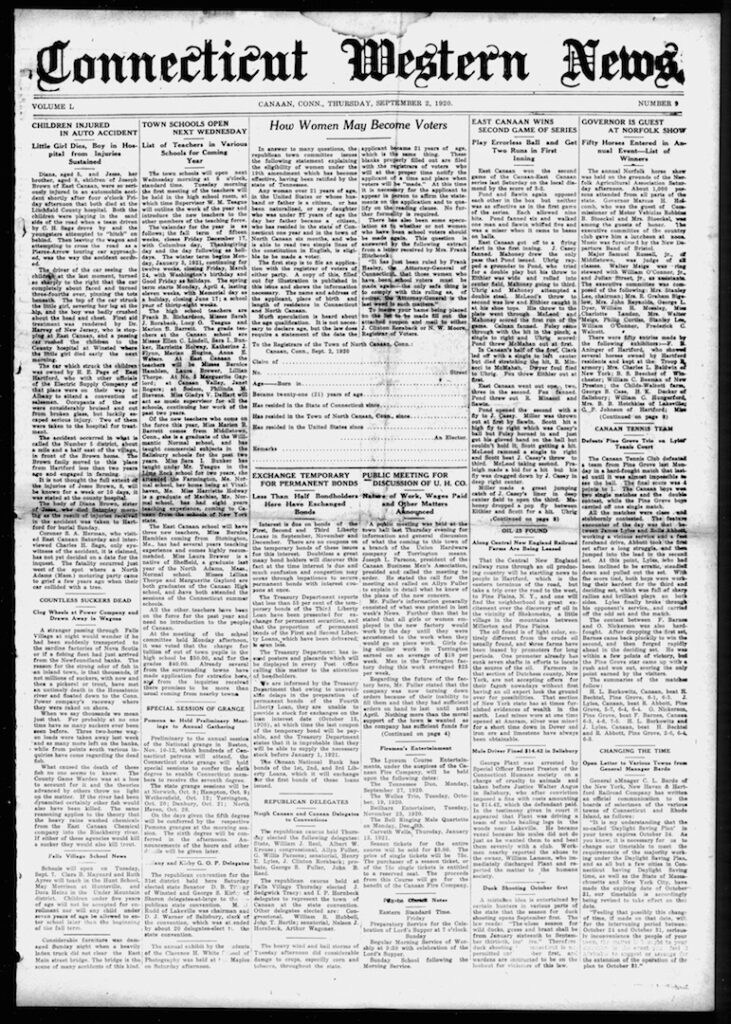 On August 21, 1920 The Connecticut Labor Press published a front page piece discussing how women gaining the vote would provide political aid to the Labor movement. See the full issue here. 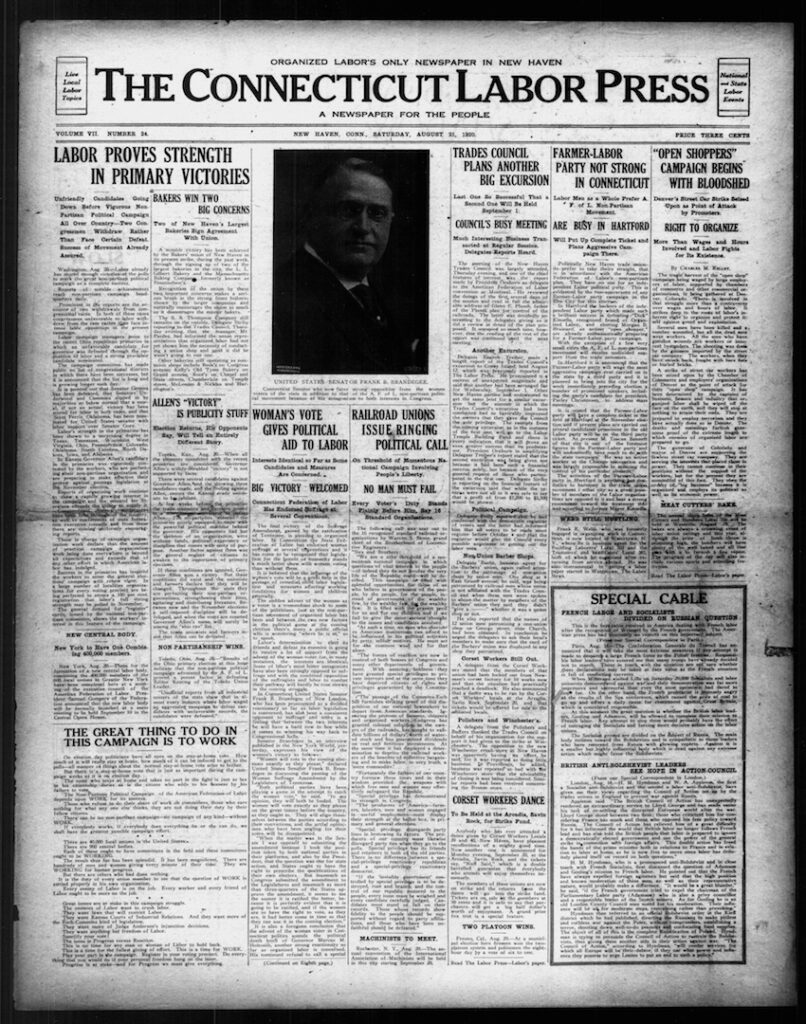 Front page of The Connecticut Labor Press on August 21, 1920.

The front page of the Norwich Bulletin on August 26, 1920 included a story from the day before on the failed efforts by anti-suffragists to prevent the proclamation by Secretary of State Colby from taking place. See the full issue here. 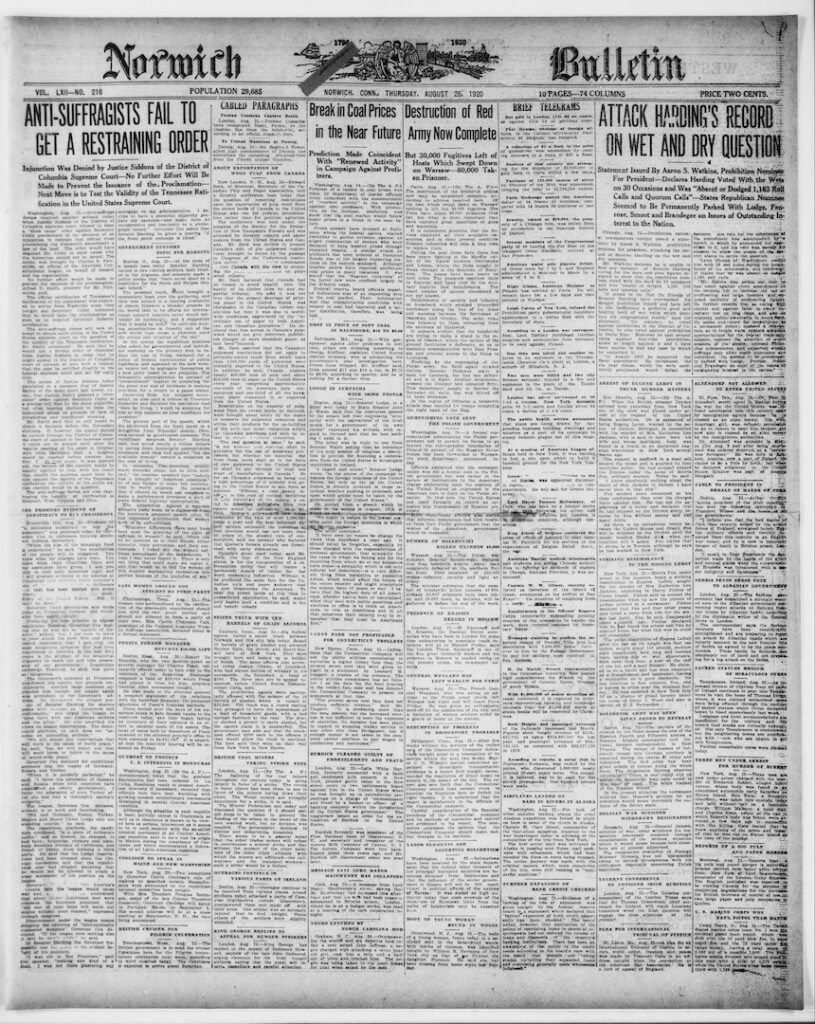 On August 19, 1920 the Bridgeport Times and Evening Farmer published multiple front page stories discussing the ratification of the amendment and resulting next steps in Connecticut. See the full issue here. 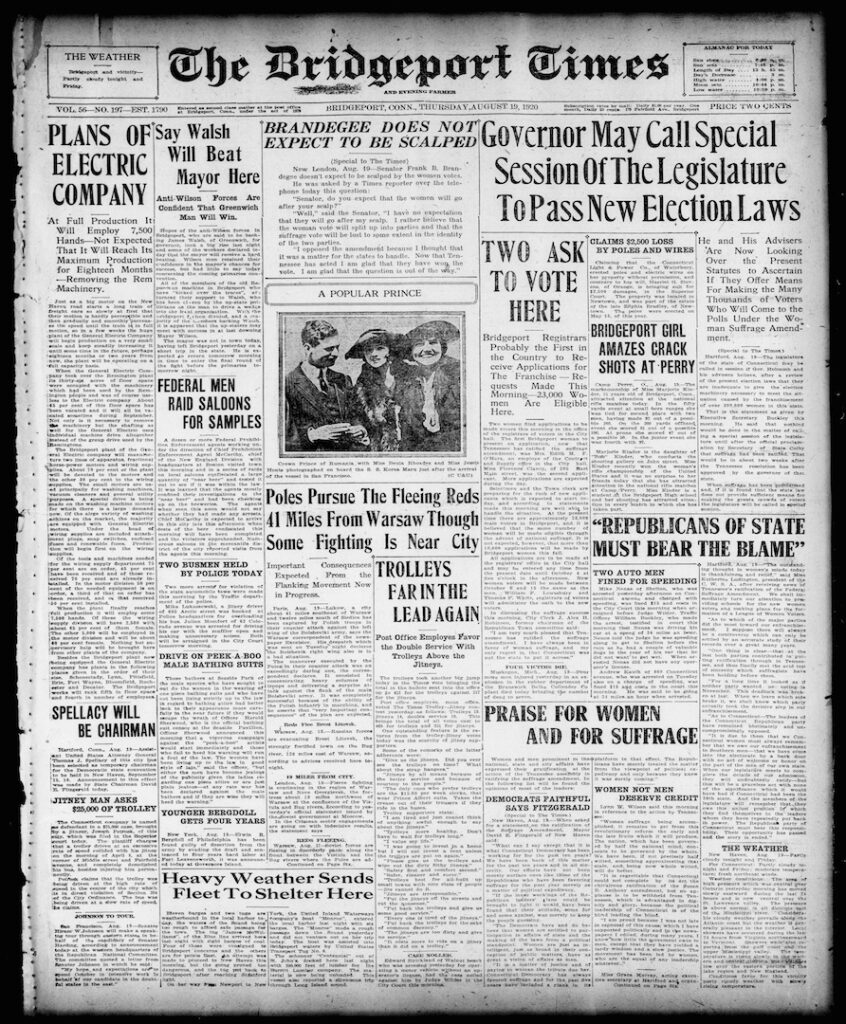 Front page of the Bridgeport Times and Evening Farmer on August 19, 1920

And the next week, suffrage was the main headline and front page story in the Bridgeport Times and Evening Farmer, with continued discussion of what would happen next in Connecticut. See the full issue here. 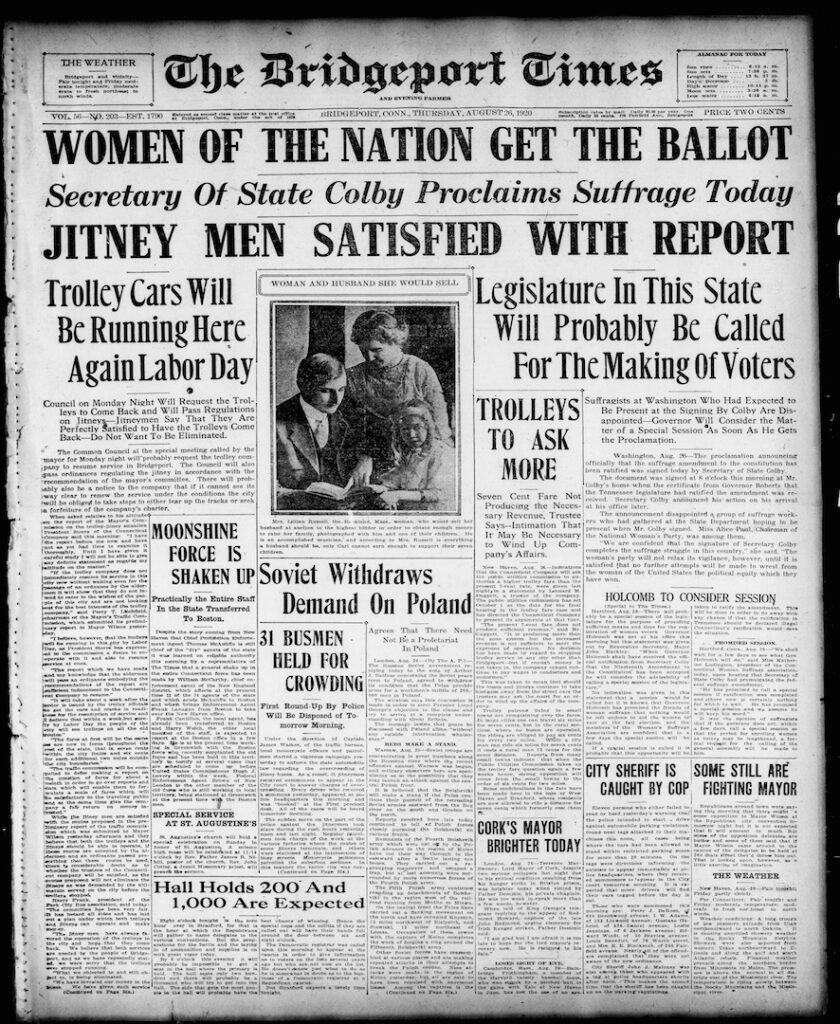 Front page of the Bridgeport Times and Evening Farmer on August 26, 1920.

To see more historic newspaper content from Chronicling America celebrating women’s suffrage be sure to visit the #19SuffrageStories hashtag on Facebook, Twitter, and Instagram where you’ll find posts from the Library of Congress, National Archives, Smithsonian, and others. And to view and search historic newspapers from Connecticut and other states, please visit the Chronicling America database at the Library of Congress.