The theme of this month’s #ChronAmParty, a monthly social media event for the Library of Congress’s Chronicling America historic newspaper database, is #NationalNursesWeek. So in celebration we’re taking a moment to share a small piece of history about nursing in the Nutmeg State! National Nurses Week is celebrated every year from May 6 – 12, ending appropriately on the birthday of Florence Nightingale, the mother of modern nursing. Florence Nightingale built her career in nursing working as a hospital administrator and organizing health services for British soldiers during the Crimean War. Using that experience Nightingale developed a new concept for the education of nurses, which became the foundation of modern nursing education. Her concept was first put into practice at St. Thomas Hospital in London when the St. Thomas Hospital School of Nursing began admitting students in 1860. The hospital’s nursing school became the premier model for nursing education, and it’s practices were followed by other hospitals and schools across the world, including those in the United States (Anderson 16).

In fact, Connecticut became an early leader in the efforts to build the field of nursing education in the United States when the Connecticut Training School for Nurses in New Haven, CT opened in 1873. The school followed the Nightingale model used at St. Thomas, and was only the third nursing school opened in the United States to do so. One aspect of the model that this school followed closely was the fact that it was opened as an independent institution, as opposed to being run by a hospital. The school had a relationship with New Haven Hospital which allowed it to provide the students with the opportunity to gain hands-on experience by providing nursing services for the hospital, while also maintaining its autonomy. One positive aspect of this setup was that it kept the hospital from taking advantage of the nursing students and using them as cheap labor (Anderson 17). However, despite this setup the school’s arrangement with New Haven Hospital didn’t result in formal payment for the nursing students – instead they were given room and board, and would receive training from the hospital’s physicians, in exchange for their services (“New Haven’s Hospitals”). 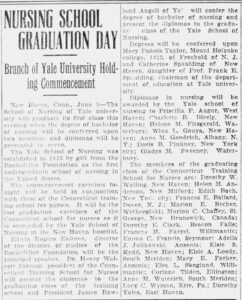 The Connecticut Training School for Nurses continued to grow and expand its curriculum until 1926, when the Yale School of Nursing graduated its first class and essentially absorbed the Connecticut Training School (“New Haven’s Hospitals”). The June 9, 1926 New Britain Herald article seen above documented the momentous occasion, sharing details from the ceremony including the names of the graduates and those leading the exercises. The creation of the Yale School of Nursing resulted from the efforts undertaken by the Rockefeller Foundation to expand the skill and knowledge gained through nursing education, in order to help improve pubic health measures. After the foundation sponsored a study of the matter, recommendations were made regarding how nursing education could be improved, including aligning nursing schools with universities and providing more financial support for the schools. Staff members from Yale University were part of the foundation’s research committee, and this partnership, along with the study results, led to the Rockefeller Foundation’s endowment of the Yale School of Nursing (Anderson 20).

Connecticut’s participation in nursing education and the nursing field continued to flourish throughout the 20th century, with additional nursing schools opening as independent institutions and as part of hospitals and universities. In honor of National Nurses Week, and in conjunction with the #ChronAmParty, the CT Digital Newspaper Project is happy to highlight just a small portion of the history of nursing in our state. Thank you to nurses in Connecticut and across the country for all of your hard work and constant dedication!

For more articles about nurses in Connecticut, see the links below for just a few items that appear in the New Britain Herald. To see more historic newspaper content from Chronicling America celebrating National Nurses Week be sure to visit the #ChronAmParty hashtag on social media sites such as Facebook, Twitter, and Instagram. And to view and search historic newspapers from Connecticut and other states, please visit the Chronicling America database at the Library of Congress.