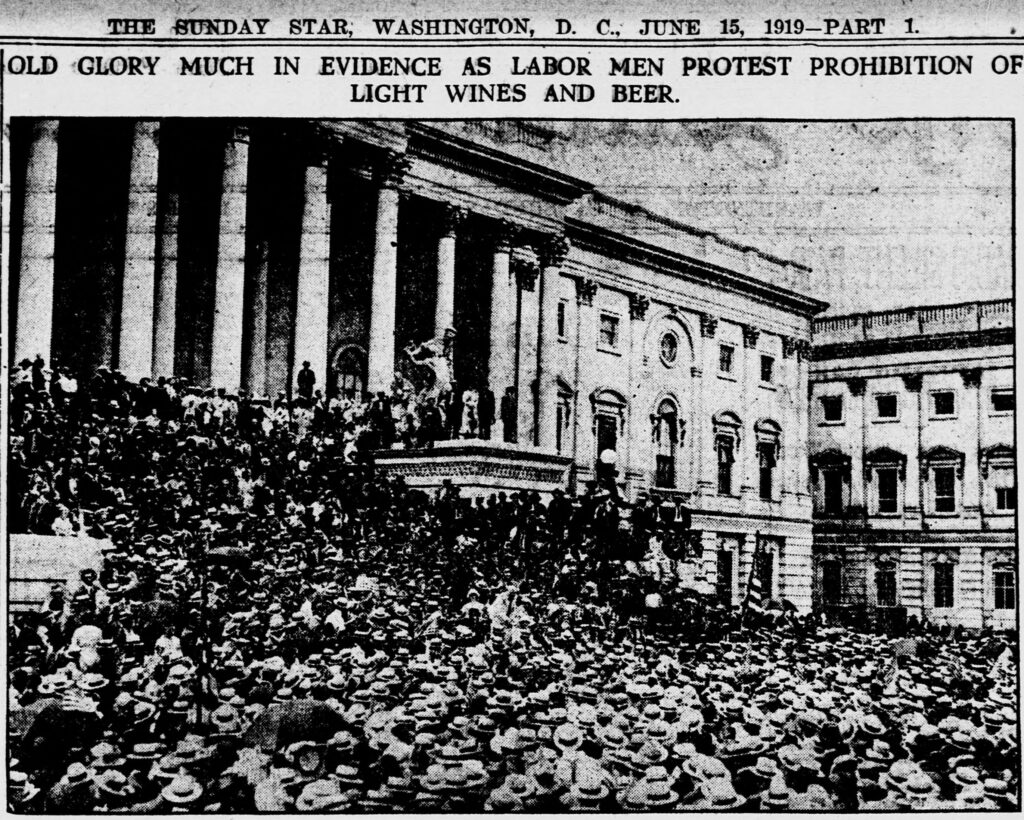 On June 15, 1919, Connecticut union officials and city delegations joined a mass protest at the U.S. Capitol to oppose the Eighteenth Amendment, which was ratified the previous January, and to reshape the Volstead Act, the enforcement legislation that was soon to be introduced into the House of Representatives. (The Volstead Act became law on October 28, 1919.)  The marchers carried American flags and demanded that 2 ¾% beer, “the workingman’s beer,” and light wines be excluded from Prohibition.

The American Federation of Labor convention in June had voted that Prohibition was intended to” deprive the workingman of the means to legally secure a glass of beer after work” and to cripple many labor organizations.  Because the Volstead Act allowed the well-heeled to store as much liquor as they could acquire before the law went into effect, working people believed that it was only their consumption that was to be controlled.  Indeed, the contrast between the license afforded the Jazz Age sophisticates partying in New York City and the crackdowns on the urban working class saloon culture of the immigrant community was stark. 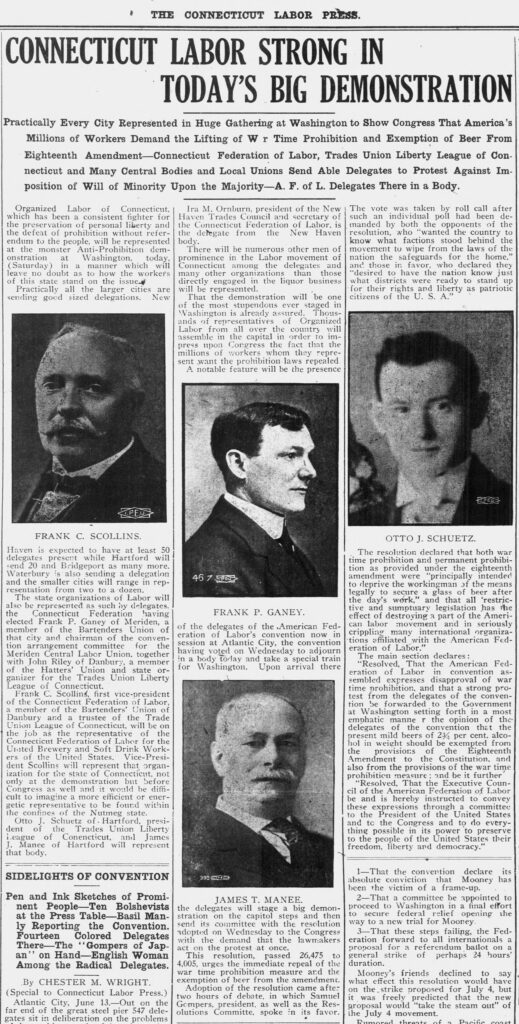 According to Harvard University historian Lisa McGirr, the Anti-Saloon League, one of the main political organizations that drove through the legislation, targeted the working class establishment as a symbol of all that was fearful about the newly immigrant working class cities that came with industrialization. The saloon was the site at which urban politics threatened to include foreign-born workers and their children.  It was the place where the saloon keeper, who was often a political figure, carried out his campaigns.  Here, the Democratic Party ward boss could hear about the needs of his constituents and distribute favors.  It was also a space open to union organizers.  Since the Irish, Italian, and Polish immigrants, and many of the German brewers, were Catholic, McGirr associates Prohibition with the rise of anti-Catholic Ku Klux Klan and other nativist forces  in the period right after the First World War.

McGirr also reminds us that it was opposition to Prohibition that galvanized support for the 1928 presidential election campaign of New York governor Al Smith and laid the basis for gathering the increasingly Americanized immigrant working class population of Connecticut and other states into the New Deal coalition of Franklin Roosevelt.  On Roosevelt’s eighth day in office in 1933, he drafted a statement to Congress urging the repeal of Prohibition and beer was re-legalized on April 6.

Details of the execution and resistance to Prohibition in Connecticut are well documented in the historical newspapers recently digitized by the Connecticut Digital Newspaper Project.  See especially the newly scanned labor paper, The Connecticut Labor Press.