The Dangers and Fashion of Bathing Suits 100 Years Ago 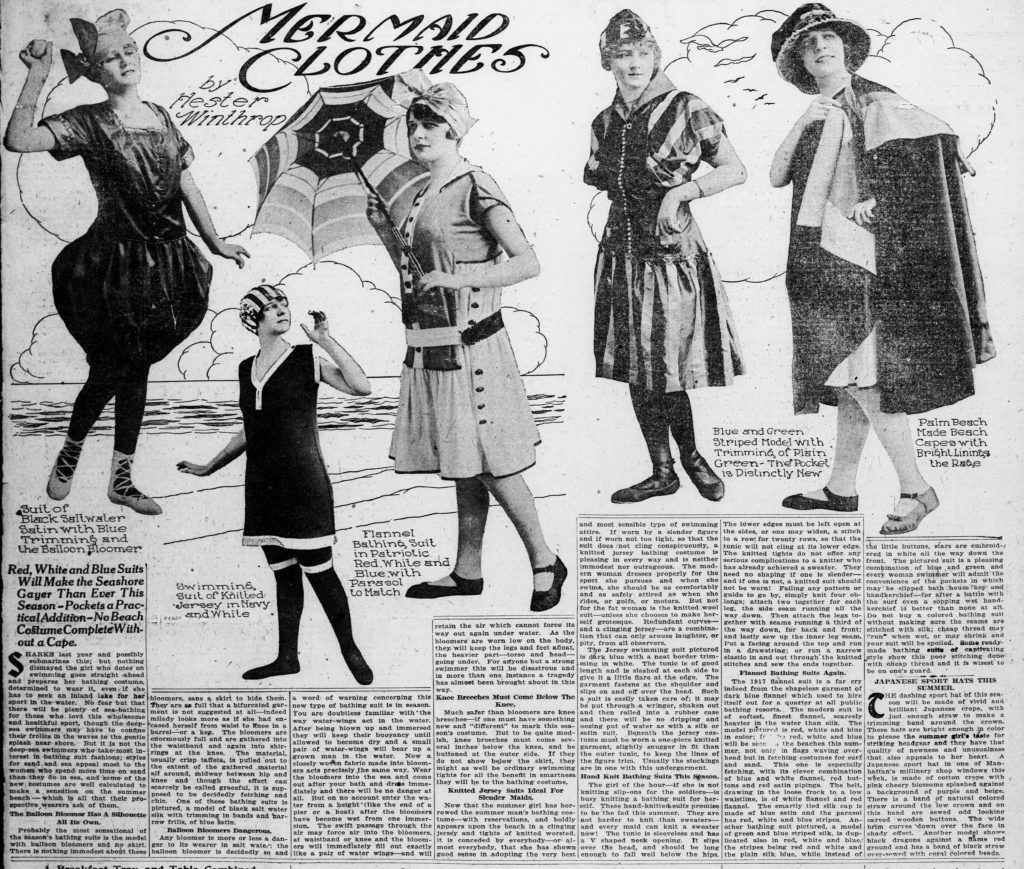 It’s midsummer and beach season is in full swing with a myriad of swimsuit styles.  Much has changed since the early 1900s, and, thank goodness, as it seems that a lot of swimwear from a century ago was considered dangerous, even in its own time.

A Bridgeport Evening Farmer article from June 16, 1917 called “Mermaid Clothes” by Hester Winthrop told of the many new trendy styles of bathing suits for women that season.  One in particular was the balloon bloomer.  The article states:

Any bloomer is more or less a danger to its wearer in salt water; the balloon bloomer is decidedly so and a word of warning concerning this new type of bathing suit is in season…Wear the bloomers into the sea and come out after your bath and dress immediately and there will be no danger at all.  But on no account enter the water from a height (like the end of a pier or a boat) after the bloomers have become wet from one immersion.  The swift passage through the air may force air into the bloomers, at waistband or knee and the bloomers will immediately fill out exactly like a pair of water wings — and will retain the air which cannot force its way out again under water.  As the bloomers are worn low on the body, they will keep the legs and feet afloat, the heavier part – – torso and head – – going under….

Yikes.  I have quite the picture in my head right now, imagining the fate of the young woman being tossed in the photograph below from the Library of Congress’ online collection. 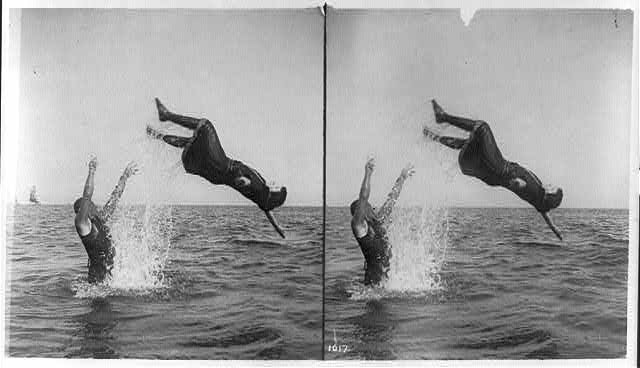 Another semi-scary bathing fact was stated in The Farmer in its July 26 issue.  The article starts by stating “Rubber plays such a large part in the modern bathing outfit that it is hard to realize that only a few years ago the only rubber item in a swimming costume was the bit of elastic run through casings in the bloomer garment…”  The article titled “Swimming Accessories of Rubber” will make you sweat just thinking about it.  I remember well the lovely bathing caps I was encouraged to wear as a kid. Take a look at the full rubber gear that was fashionable in 1917.   This July 26 article says that “The most becoming type of rubber swimming cap…is the mushroom type.  A very fetching mushroom hat of pearl gray rubber, with a pleated edge and a flower of rose pink rubber at the front.  The puffed crown and pleated edge are mounted on a close fitting under-cap of rubber and the hair is well protected from flying spray.”

In Splash: A History of Swimwear (New York, 1990), the author writes that “as late as the 1920s some local ordinances in America called for women to be fined and removed from the beach for indecent exposure, including legs without stockings, despite beach shoes and long skirts” (pp. 58, 60).

The Library of Congress has some great images online of bathing fashion, including a great panoramic photograph from June 20, 1920 called Annual “Bathing Girl Parade.” The whole panoply of styles of swimwear and accessories are on display.

For men’s swimwear in the early 1900s “a top covered the shoulders, but permitted movement of the arms, and body-hugging leggings could be rolled up from the knee.  What was essential, however, was that this functional outfit not be confused with the patent indecorum of swimming in one’s underwear.  Indeed, the self-conscious suit elements of men’s swimwear, including superfluous belts and buckles and bright striping unlike any found in underwear, were introduced explicitly in order to differentiate swimwear from underwear (Splash: A History of Swimwear, New York, 1990, p. 54).

In the Fall 2007 issue of Journal of Social History, author Deirdre Clemente wrote about the sportswear industry creations on display up and down South Florida beaches.  She writes that “as there was less social concern about men showing their bodies in public, their swimwear was distinctly more brief.  Men wore one piece, knitted suits with low necklines that allowed for bare arms and legs.  These suits were belted and very form fitting – when wet, the suits became even more so. ”

We’ve come quite far in 100 years with the fashion and can’t quite imagine what the next 100 will bring.  For now, enjoy the beach in whatever fashion suits you.