What Connecticut Made of Edward Bellamy’s Utopia 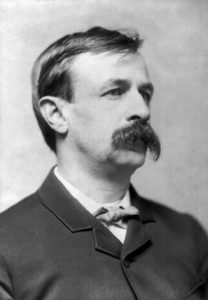 In the June 5, 2017 online version of the New Yorker, Harvard historian Jill Lepore bemoans a contemporary literary scene in which there is not only a plethora of dark dystopian novels, but dystopian novels that are no longer in the tradition of a “fiction of resistance” (“A Golden Age for Dystopian Fiction:  What to Make of Our New Literature of Radical Pessimism”).  She reviews a series of the plotlines of these books, asserting that dystopian literature has “become a fiction of submission, the fiction of an untrusting, lonely, and sullen twenty-first century, the fiction of fake news and infowars, the fiction of helplessness and hopelessness.  It cannot imagine a better future, and it doesn’t ask anyone to bother to make one.”  In contrast, she reminds us that earlier dystopian fiction was usually a response to a specific vision of utopia.  There were multiple dystopian responses, for example, to Edward Bellamy’s best-selling 1888 utopian fantasy Looking Backward.  Bellamy’s blockbuster described an eccentric socialist or communitarian utopia in the year 2000 and it became so much a part of popular culture that references to it truly permeate the local news  found in the Gilded Age historical state newspapers that are being digitized by the Connecticut Digital Newspaper Project. 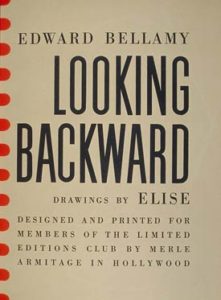 According to the New Haven Morning Journal and Courier of April 8, 1890, by this date Looking Backward had become—along with Jane Eyre, David Copperfield, Uncle Tom’s Cabin, and Little Women—one of the top ten most read books in New England (“What They Read,” p. 1).  So, who was reading Bellamy in Connecticut?  A brief search of the title reveals that in December of 1889, the Rev. L. H. Squires of the Messiah Church was scheduled to give the last of a series of lectures on the book and that a Nationalist Club, that is, an organization that would be part of a national network devoted to implementing Bellamy’s ideas, might soon be formed (“At the Messiah Church, Dec. 28, 1889, p. 2).  At the Hillhouse School graduation in April of the next year, senior Benjamin W. Mann presented on what he believed were the advantages and disadvantages of Bellamy’s scheme.  The author’s plan to ameliorate inequality with a reorganization of the industrial system, he reportedly said, identified him as one of those “large, generous hearted men” who cloth their theories about reform in fiction in order to attract the attention of “mankind.”  Yet, he argued, Bellamy unhelpfully proposed a scheme that ran against the period’s devotion to individualism and personal liberty (“High School Exercises, New Haven Morning Journal and Courier, April 25, 1890, p. 2).

The mayor of New Haven, Joseph B. Sargent (1822-1907), was said to “fall in with the ideas of the author of Looking Backward” when he advocated the city ownership and operation of all street rail lines, gas and electricity plants, as well as the single tax plan of Henry George (Morning Journal and Courier, Jan. 9, 1891, p. 2).  Commerce was beholden to Bellamy as well.  Those housewives whose attention was sought by the manufacturers of Pearline soap compound were induced by an advertorial entitled “Co-operative Housekeeping.”  The text read: “One of the fairest dreams of Edward Bellamy in his popular book, Looking Backward .  .  . [and one which] has a special attraction to every homemaker, is co-operative housekeeping”(Morning Journal and Courier, Nov. 22, 1889, p. 2).  It was also of interest to the editors of the Morning Journal and Courier that the bookstores frequented by Italian immigrants were stocking Bellamy’s work in Italian translation (“From Dream Books: The Improving Literary Taste,” Daily Morning Journal and Courier,  Jan. 13, 1903, p. 6).  Researchers interested in Bellamy’s reception in our state will find many additional examples If they conduct their own search in Chronicling America.

We must leave it to the historians and cultural critics like Lepore to deepen our understanding why the first Gilded Age swooned to tales of utopia while our own is wading through visions of doom.