In the inaugural gown. Portrait of Mrs. McKinley, no. 3 / Frances Benjamin Johnston. Courtesy of the Library of Congress.

As we  all prepare to experience the inaugural media extravaganza, it is worth remembering that for much of our history, most people followed the festivities only in the print media.  The inauguration of William McKinley in 1897 was recorded by a movie camera but a quick viewing of the film demonstrates that the short clips could clearly not fully satisfy those who wanted to participate vicariously in the events.  The New Haven Daily Morning Journal and Courier, like other newspapers, tried to fill in the gaps.

The material is what is known as cloth of silver.  The ground work is of white satin heavily woven with silver thread in a conventionalized lily design.  The train, which is plain, full, and sweeping, measures two and a half yards in length.  On the left side it is open over a panel of seed pearls embroidered on satin.  Beginning at the bottom is a flounce of Venetian point lace of a special and beautiful design.  .  .

This is the content from only the first of many column inches devoted to the garment.  This magnificent dress was reported to be just one piece in a wardrobe consisting of “ten rich costumes of satin velvet and silver cloth” that cost between eight and ten thousand dollars. The March 5th issue has an article headlined “Forty Thousand Roses” which describes the fabulous setting in which Ida McKinley would display her taste in formal wear. 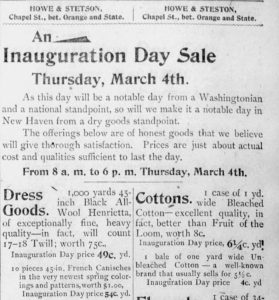 Then, as today, stores seized on the interest in the social life of celebrities to promote their wares.  With the retail savvy of Ivanka Trump, the Howe & Stetson department store bought a large ad space on the same page as the description of Ida McKinley’s wardrobe, announcing special Inaugural Day prices for ladies silks, gloves, ribbons, and gloves.

The  New Haven Daily Morning Journal and Courier and related titles from 1880-1908 are currently being digitized by the Connecticut Digital Newspaper Project, with some years already online in the Library of Congress’ historical newspaper database called Chronicling America.

To explore the topic of McKinley’s inauguration or Howe & Stetson merchandising in online Connecticut newspapers, go to http://chroniclingamerica.loc.gov/, click on the “Advanced Search” tab, select “Connecticut,” and enter these terms into the search boxes: