On September 30, 1916, the Bridgeport Evening Farmer reported that Mrs. Frank Yosemite, formerly Miss Edith Riggs of 200 Fox Street, had left “civilization” and moved with her Native American husband, Frank Yosemite, to a hogan in a dense patch of Woodland above Trumbull Rd., near the upper end of Bunnell’s pond in Beardsley Park. 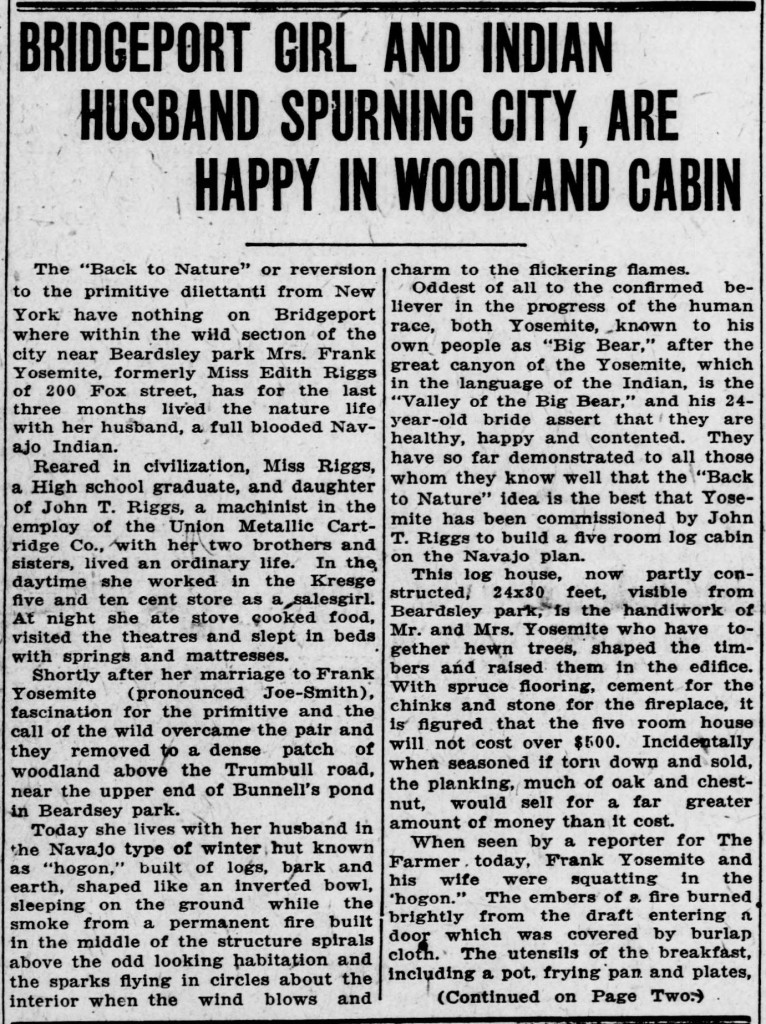 When asked by the Farmer reporter why they had taken this step, Yosemite said, among other things, “Living conditions in Bridgeport are intolerable. People are cramped in their quarters and being put out on the street.” The boom of war manufacturing and the resulting flood of labor into the city, had, indeed, created a housing crisis in Bridgeport. Yosemite was also of the opinion that life expectancy in Bridgeport had dropped to around 35 years* and this contrasted with that of his Navajo community, in which he believed the average life span to be between 90 and 100 years. The historian Roderick Nash famously pointed out that the turn-of-the-century “Back to Nature” movement only took off, ironically, when the urban environment acquired many of the connotations of wilderness. Boston’s slum conditions, for example, had been exposed in an 1898 book called The City Wilderness. Upton Sinclair described the Chicago stockyards as The Jungle. The Yosemite’s seemed to see things in this light.

Historians say that it was not unusual for middle-class city dwellers to indulge in various kinds of “Back to Nature” activities at the turn of the century. “Whether fretful of the pace of life that industrialization and urbanization demanded, or fearful of the physical and mental debilities industrial cities were said to produce, urbanites searched for alternative outlets. The desire nurtured such trends as the consumption of Craftsman furniture, the practice of woodcraft, interest in American Indian culture and products, and the nature study movement, to name a few” (Kropp, p. 6). The image below, from the Evening Public Ledger (Philadelphia PA) and published the same month as the Yosemite story, illustrates the phenomena. 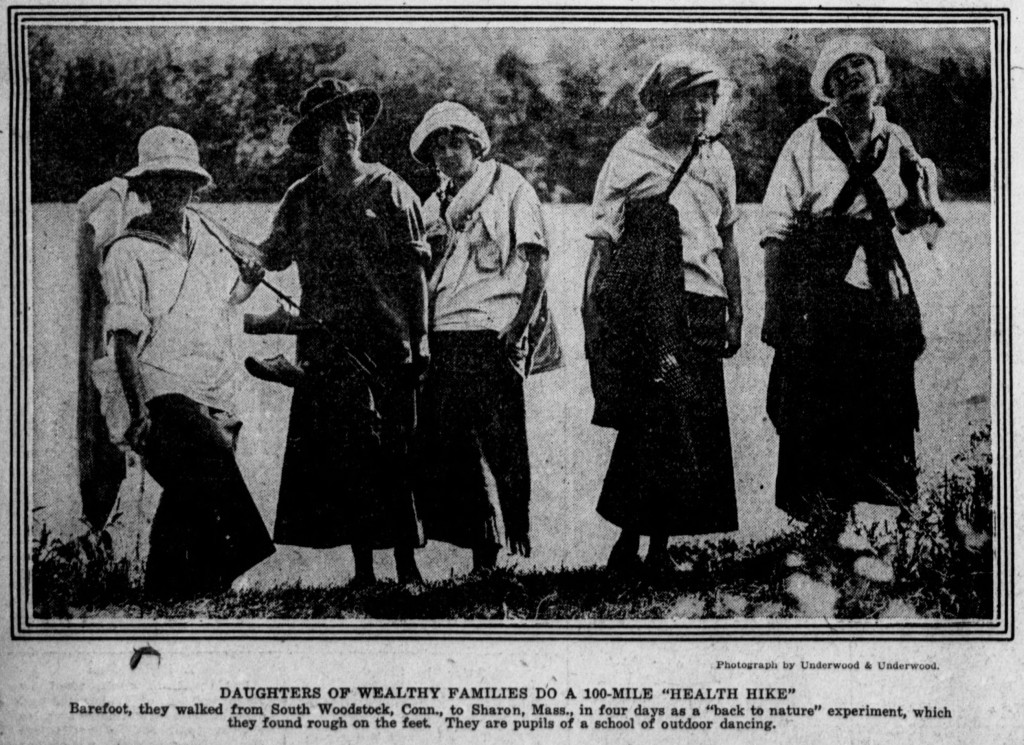 But Edith and Frank Yosemite were not middle class. Edith worked as a salesperson at the Kresge five and dime store and was the daughter of John T. Riggs, a machinist at the Union Metallic Cartridge Co. Frank was not just interested in American Indian culture; he had grown up the son of a chief on a Navajo reservation. In Bridgeport, he worked as a steamfitter at the Remington Arms and Ammunition Co. It would be terrific if historians of Connecticut could begin to uncover the ways in which the turn-of-the-century “Back to Nature” movement was manifested in working class communities in the big industrial centers and the popular culture referents that both fueled and expressed it.

*Thanks to reference librarian Steve Rice for discovering that while in 1916, in Connecticut as a whole, the largest percentage of the total of people who died, passed away between the ages of 70 and 74 years of age. In New Haven, the largest increment of deaths occurred in people between 60 and 69 years old (heart disease, other and cerebral hemorrhage were most common). In Bridgeport, for some reason, the largest percentage of the whole died between the ages of 40 and 49. There was clearly some material basis to Frank Yosemite’s claim that people in Bridgeport were dying at a young age. See U.S. Bureau of the Census. Mortality rates 1910-1920 with population of the federal censuses of 1910 and 1920 and intercensal estimates of population. It is available at the State Library.

Kropp, Phoebe Kropp. “Wilderness Wives and Dishwashing Husbands: Comfort and the Domestic Arts of Camping in America, 1880-1910.” Journal of Social History, Fall 2009, pp. 5-30. Available via JSTOR, a database accessible at the State Library.

Nash, Roderick. “The American Cult of the Primitive,” American Quarterly, Autumn 1966, pp. 517-537. Available via JSTOR, a database accessible at the State Library.

Tags: Back to Nature Movement