September 8, 1918, the War Pilgrimage to Lebanon

September 8, 1918 was an important day in the effort to mobilize Connecticut residents for the Great War.  On that day, Governor Marcus H. Holcomb and the Connecticut Council of Defense organized the most audacious patriotic celebration held during the duration of World War I.  The heart of the celebration was a car caravan of 3000 vehicles to a historic site from the American Revolutionary War, the “War Office” in Lebanon, Connecticut.  The “War Office” was the location from which Jonathan Trumbull and his Council of Safety managed the state’s contribution to that effort.  According to Bruce Fraser, a promoter of Connecticut heritage and the author of “Yankees at War: Social Mobilization on the Connecticut Homefront, 1917-1918,” the caravan was described by the Council of Defense as a “sacred pilgrimage,” that would draw a direct link between struggles for American ideals and virtues, past and present (Fraser, p. 282).  Aubrey L. Maddock, Secretary of the Publicity Committee of the State Council of Defense, opened with these words:

We have again turned to the shrine of our fathers in an hour of trial and need.  Even as the thirteen English colonies in America turned, at the outbreak of the Revolution, to Connecticut and Lebanon for direction and aid, so we of today have come to this ancient town, have gathered beside this historic War Office, in order that we may return to our tasks filled with a greater determination to contribute our maximum to the success of American arms (Maddock, p. 1).

Maddock’s substantial address, which is available in the State Library collection, was only one component of the event.  Governor Holcomb, dubbed Connecticut’s “third war governor,” and the Reverend G. B. Cabanel, chaplain of a fighting division known as the French “Blue Devils,” were the featured speakers.  A choir made up of voices from 130 different choirs in the state performed. The luminaries also visited the tomb of John Trumbull, the barracks site of a French legion that had camped in Lebanon during the revolutionary war, and looked at relics collected by the Daughters of the American Revolution (Fraser, p. 283).  Fraser says that the account from the Norwich Bulletin of September 9, 1918, an article now available on microfilm here at the State Library and soon to be accessible in the Library of Congress’s Chronicling America historical newspaper digital archive, is the most complete record of the event.  A small excerpt of that piece is pictured just below. 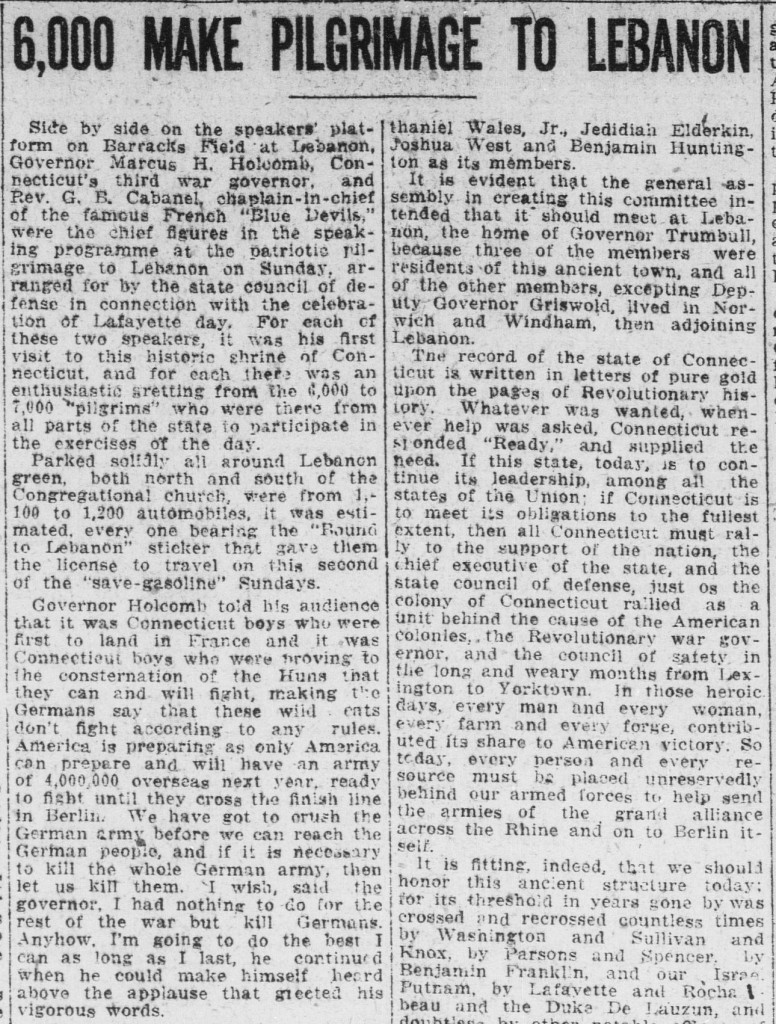 The “sacred pilgrimage” was analyzed by Fraser as an event that showed both the strengths and weaknesses of the Connecticut effort to mobilize.  On the one hand, he felt, it was surely inspiring to the old guard of Connecticut society and politics, whose links to the revolutionary era were a source of pride and self-confidence.  On the other hand, he thought that the association of loyalty and patriotism with the symbols of an old-line Connecticut order that was equally identified with fear and anxiety regarding the immigrant community unnecessarily contributed to a war-time climate that normalized suspicion and even vigilantism against aliens in the state.  Those either skeptical or intrigued by Fraser’s point of view on the war pilgrimage, as summarized here, can research and decide for themselves, as the Connecticut State Library is home to a number of the primary source collections he consulted.  The 1910-1922 run of the Norwich Bulletin, the newspaper from which this excerpt was taken, will be online sometime this winter or spring via Chronicling America, the historic newspaper database of the Library of Congress.