A Mystery from the Connecticut WWI Home Front

On June 17, 1918, the Bridgeport Times carried a full-page ad urging the purchase of war savings stamps.  The ad was placed by a lace manufacturer, the International Textile Company of Bridgeport.  While most company-sponsored ads urging the purchase of war stamps wooed potential participants with imagery of Uncle Sam or a heroic American soldier, the International Textile Company of Bridgeport associated their call to support the war effort with an image from a poster created by the Magyarországi Szociáldemokrata Párt, a Hungarian social democratic party active in the Austro-Hungarian Empire.

The illustration showed an image of a skeletal imperial officer shoveling working class men into the maw of a giant gun.  A translation of the Hungarian text accompanied the image and said:  “Budapest labor will hold a mass meeting against the horrors of war on Sunday afternoon.  .  .  Every worker must protest against the wholesale slaughter.”  Should we presume that the International Textile Company, which likely employed many Hungarian immigrant workers, was trying to effectively appeal to their workforce with imagery and language that would be familiar to them? “To Forever Stop Feeding of Men to Guns, Buy War Savings Stamps Now!,” the ad shouted. Should it be read as an attempt to equate European social democratic protests about working class men being cannon fodder with the English-language slogan that World War I was “the war to end all wars”?  In addition, the ad contains at the bottom some bits of stock text about registering to buy stamps:  “If You are of Foreign Birth you are a traitor to the land that protects you against autocracy if you fail to support the country that supports you.” 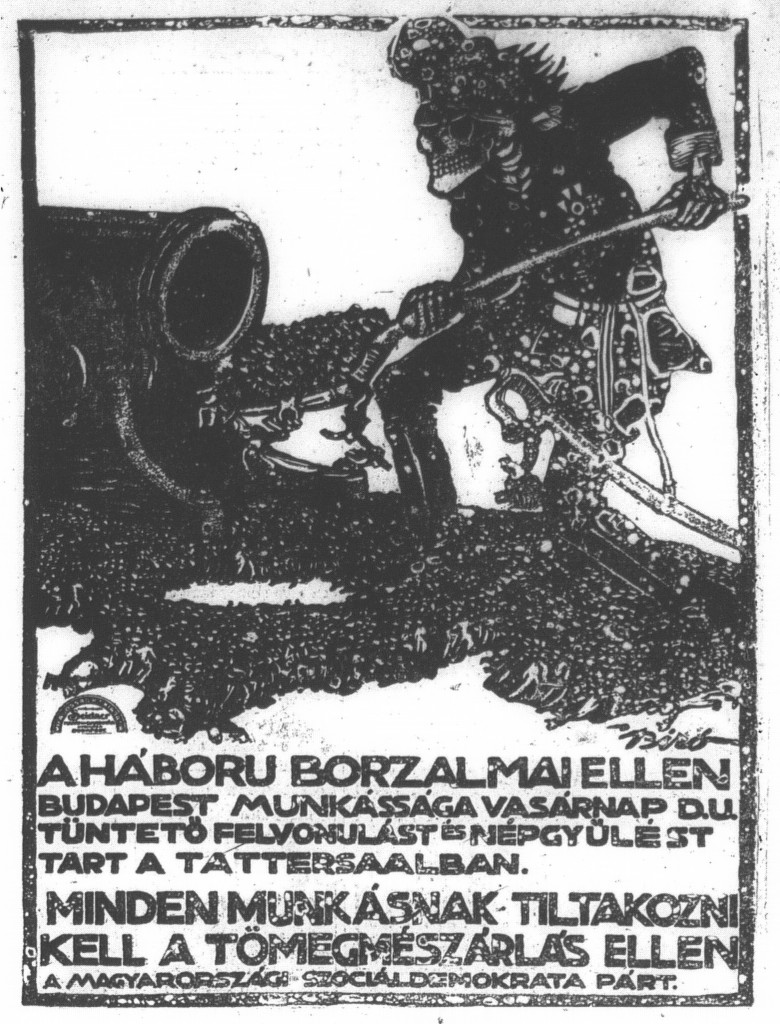 Less than one month after the publication of the company’s ad, all of the property of the International Textile Company was seized by the U.S. Alien Property Custodian, A. Mitchell Palmer, under the Trading with the Enemy Act of 1917 (Hartford Courant, July 4, 1918).  The owner, Max Henkels, son of the founder of a parent firm based in Germany and a graduate of Columbia University, was declared by one Francis P. Garvin of the FBI to be a German citizen and reservist officer.  The time of the seizure was said to be predicated on the discovery that all the company books “which would tend to show German ownership” had been destroyed (Hartford Courant, July 4, 1918).  By July of 1921, three years later, Henkels had proven that he had applied for citizenship in early 1918, was naturalized, and should not have been targeted by the Alien Property Custodian.  The U.S. government vindicated Henkels and awarded him $1,502,555.25, the amount of the proceeds from the sale of his factory.

How, in light of all this information, should one interpret this advertisement as a whole? It was published at the same moment that the Hungarian language newspaper of Bridgeport was expressing outrage at the amount of anti-German and anti-Hungarian feeling that the war was stirring up in their town (Bucki, p. 205).  Was the International Textile Company was doing its duty to rally and, thus, protect immigrant workers in an especially creative way? Was Henkels’ unusual “Buy War Stamps” ad an attempt to prove his loyalty to the United States’ war effort and to urge Hungarian immigrants to prove their loyalty as well?  Or, was it a sly subversion of the wartime requirements placed on employers and workers officially deemed enemy aliens?  How was this complicated and difficult-to-interpret ad, with its shocking antiwar image, received by the many different readers of the Bridgeport Times? Was it an accident that Henkels’ property was seized so soon after the publication of the ad?  How did the employees of the International Textile Company experience the seizure of Henkels’ property?

The International Textile Company was recognized as having been an operation that combined paternalism toward the employees with the latest in industrial technique, including much specialized automatic machinery powered with electricity.  A 1917 History of Bridgeport wrote of Henkels’ Bridgeport plant:

In the conduct of this important industry the company is studying not only the best methods of manufacture but also every question bearing upon the trade and upon labor conditions. Their factory has been built with a view to the comfort of the employees and they are further looking to the welfare of those in their service by the erection of cottages for the workmen, which will be rented at the lowest possible figure. These are from two to five room cottages, all supplied with bathrooms and characterized by the best sanitary conditions, and the plant was built with the utmost regard for sanitation and light.  .  .  Mr. Henkels’ long experience has made him thoroughly familiar with the trade not only in this country but abroad, and in the equipment of the Bridgeport plant he has embodied the most progressive ideas gleaned from Europe and America. (p. 726).

Before the U.S. entry into World War I, Max Henkels’ ties to Europe were clearly seen as an asset. Suddenly in 1917, all that changed.

In Hungary, meanwhile, the Magyarországi Szociáldemokrata Párt, like all the social democratic parties in Europe, split over whether or not to maintain their antiwar position.  At the fall of the dual monarchy of Austria and Hungary, the Magyarországi Szociáldemokrata Párt collaborated in the creation of a Hungarian republic, but that republic was soon crushed and replaced by politically conservative regime.  How many of the pro-republic Hungarians left Bridgeport to try to help establish the new nation in Hungary?  How many returned to Bridgeport disappointed? How were these events perceived by the different parts of the Hungarian community in Bridgeport and how did that affect their memory of the World War I experience as a whole?

The questions posed by this singular full page ad in the Bridgeport Times could be the beginning of a rich study of the complexity of the politics of the home front in one important Connecticut industrial center in the First World War era.

Resources at the Connecticut State Library