Connecticut Suffragists and the Case of Bessie Wakefield

On November 4, 1913, Bessie Wakefield, a 24-year-old mother of two children, became the first woman sentenced to death in Connecticut in over a century. In the months following Wakefield’s conviction, Connecticut suffragists found themselves at the center of what became a national outcry at the impending execution of a woman and mother of two. As letters flooded into Connecticut Governor Simeon Baldwin’s office, Connecticut women’s suffrage organizations debated how they could champion equal rights for men and women, while not asking for special treatment for a woman.

Bessie Wakefield had been convicted of first-degree murder for the death of her husband, William Wakefield, whose body was discovered in the woods near Cheshire, Connecticut, on June 28, 1913. William had been shot and stabbed multiple times, and strangled with a pair of shoelaces. Within a few days, Bessie and local farmhand James Plew were arrested for the crime. The state’s case against them claimed that Plew had killed William, and that Bessie had an agreement with Plew, conspired with him, and encouraged him to kill her husband, making her an accessory to the crime.

Plew pled guilty, but Bessie Wakefield denied any involvement in or knowledge of the murder of her husband. Despite her denials, Wakefield was found guilty and sentenced to death by hanging. A Norwich Bulletin article reported that no woman had been hanged in the state of Connecticut since 1786.

Following Wakefield’s sentencing, there was an immediate public outcry and debate about whether a woman should be subject to the death penalty. The Bridgeport Evening Farmer opened a public discussion, soliciting letters to the editor on the question: “Should a woman who commits premeditated murder be hanged for her crime, the same as a man might be?” 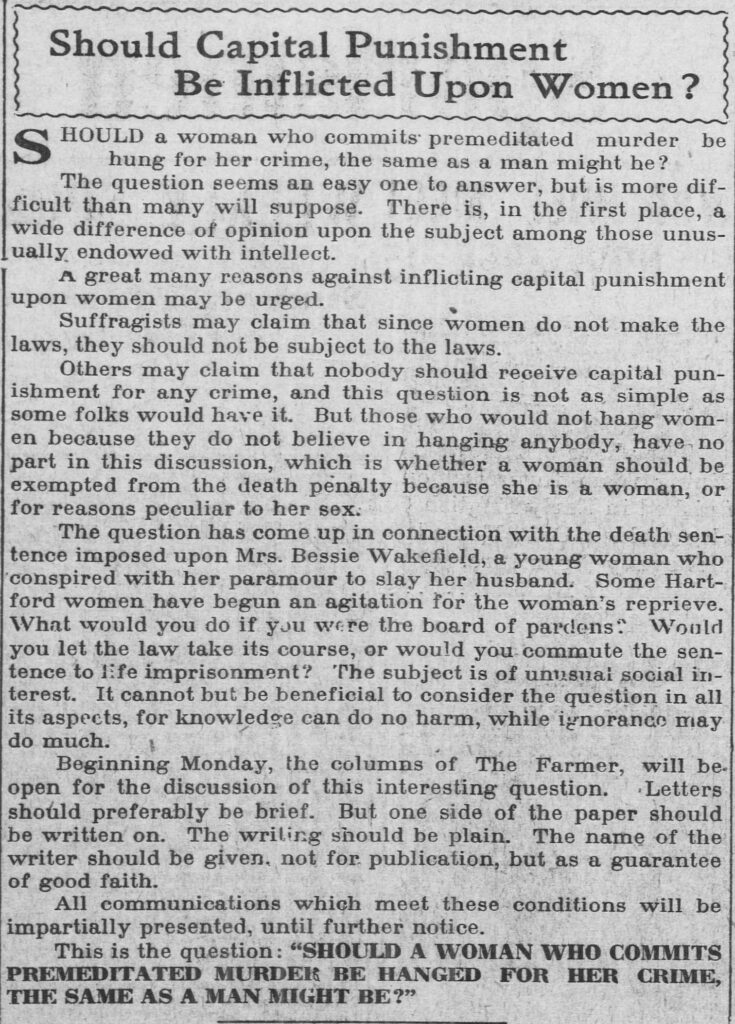 “Should Capital Punishment Be Inflicted Upon Women?” The Bridgeport Evening Farmer, November 8, 1913

Prominent in the debate over Bessie Wakefield’s case were Connecticut suffragists. The day that Wakefield was taken to the Connecticut State Prison to await her execution, the Norwich Bulletin reported that Katherine Houghton Hepburn, president of the Connecticut Woman Suffrage Association (CWSA), stated that “she believed she voiced the sentiment of all suffragists in Hartford in saying that she did not believe Mrs. Wakefield should be hanged.” 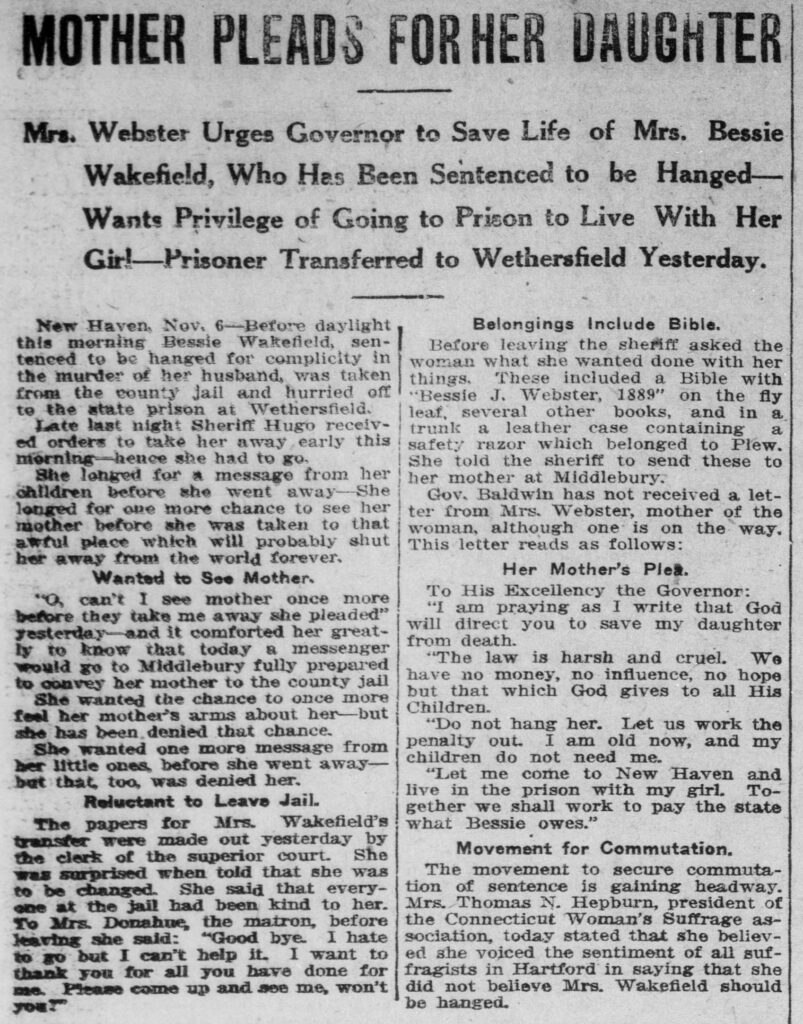 Yet suffragists found themselves fielding accusations of hypocrisy. If they truly wanted equality of the sexes, critics said, then women had to submit to the same punishments as men under the law. One letter to the editor published in the Norwich Bulletin shared this critique: “Even the advocates of woman suffrage who are in the lead in the fight for the life of Bessie Wakefield appear to lose sight of the fact that if woman is to stand on political equality with man (and I believe she should) she must also be willing to suffer the same punishment for the same crime.” 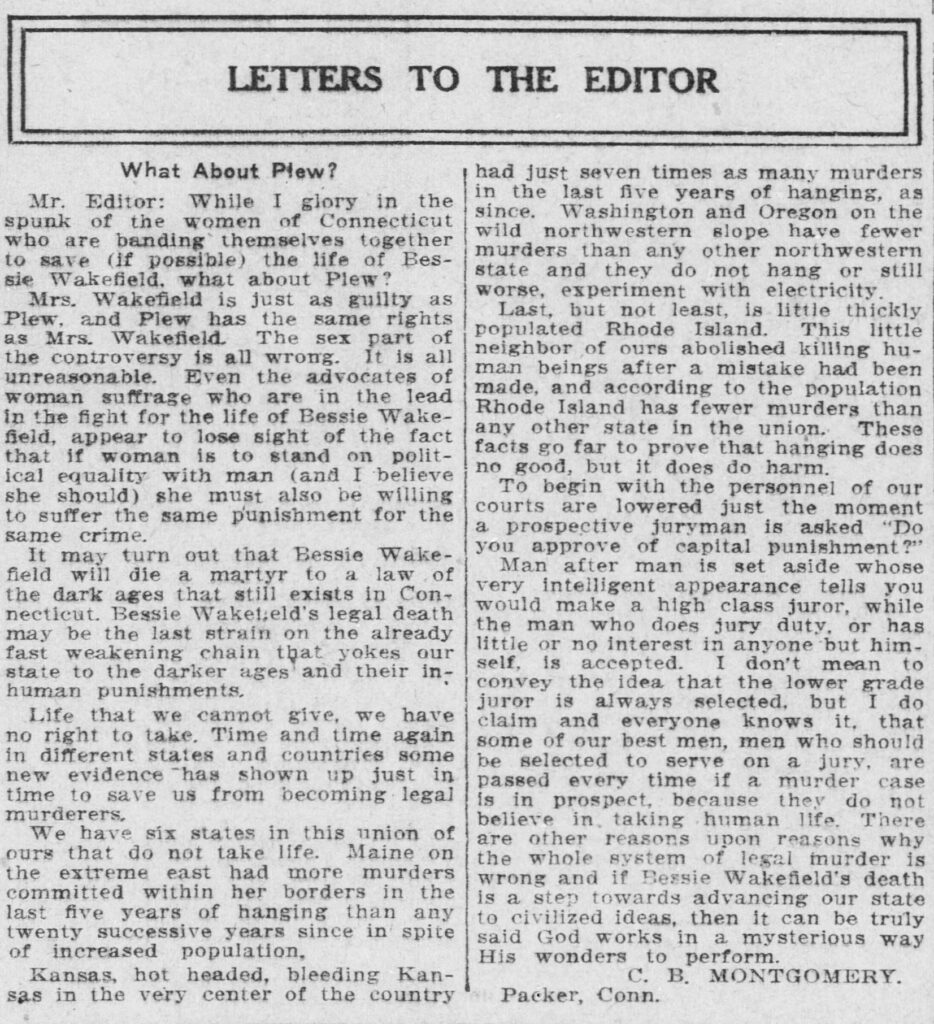 “Letters to the Editor; What About Plew?” Norwich Bulletin, November 18, 1913

In response, the executive board of the CWSA issued a set of resolutions, which they directed to the Connecticut Board of Pardons. These resolutions stated that since women had no voice in making laws in Connecticut, including those laws that determine how crimes are to be punished, “we protest against the extreme penalty being applied to a member of a class which has been denied the protection of representation.” 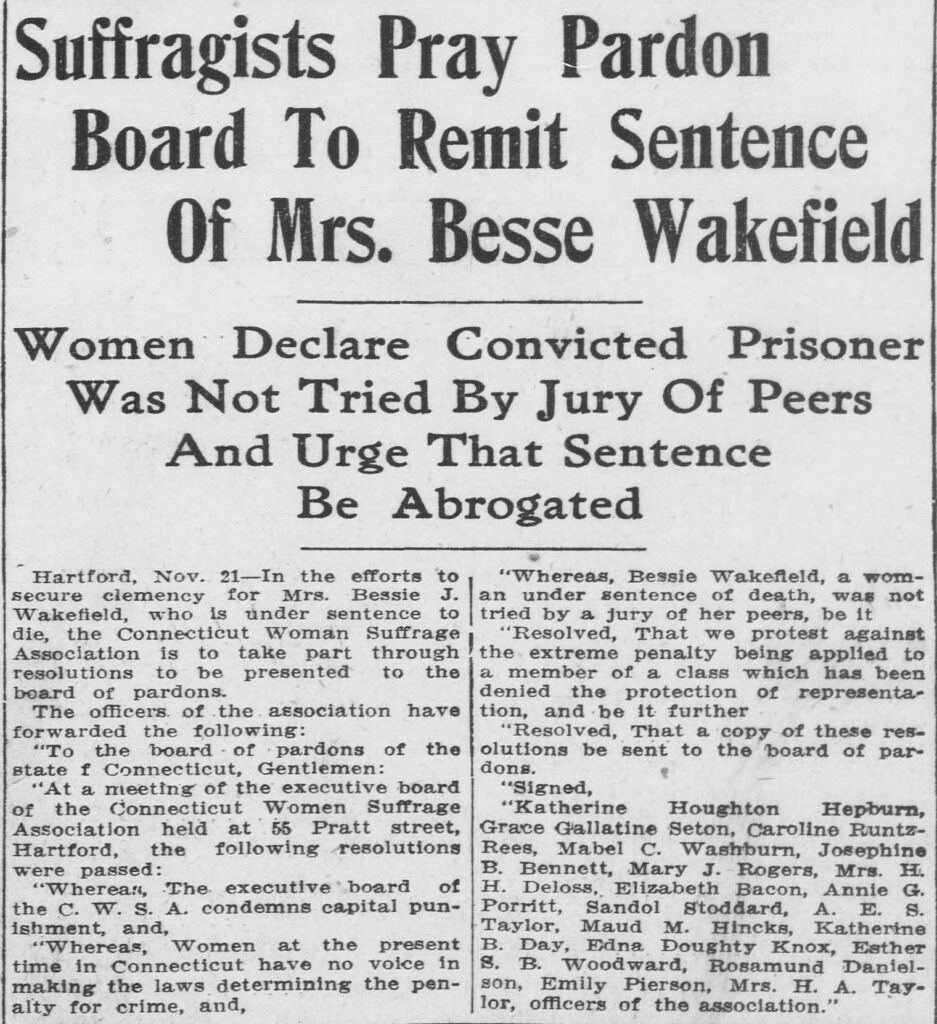 Yet not all of the state’s suffragists were in agreement. The Bridgeport Evening Farmer reported that the Hartford Equal Rights Club rejected the CWSA resolutions temporarily “after several of the members had spoken vigorously in disapproval of them, maintaining that if the woman had transgressed the laws of the state she should pay the price. Others spoke in favor of the passage of the resolutions, but it was finally voted to table the matter indefinitely.” 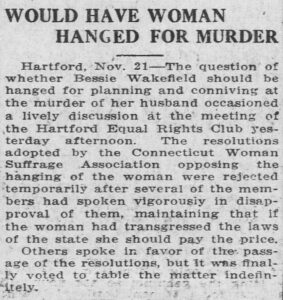 “Would Have Woman Hanged for Murder.” The Bridgeport Evening Farmer, November 21, 1913

After over 30,000 letters and petitions from across the country were sent to the Governor and Connecticut women’s organizations planned protests and raised money for Wakefield’s appeal, on April 17, 1914, the Supreme Court ordered a new trial for Wakefield, citing an error in admitting evidence by the coroner in the first trial. 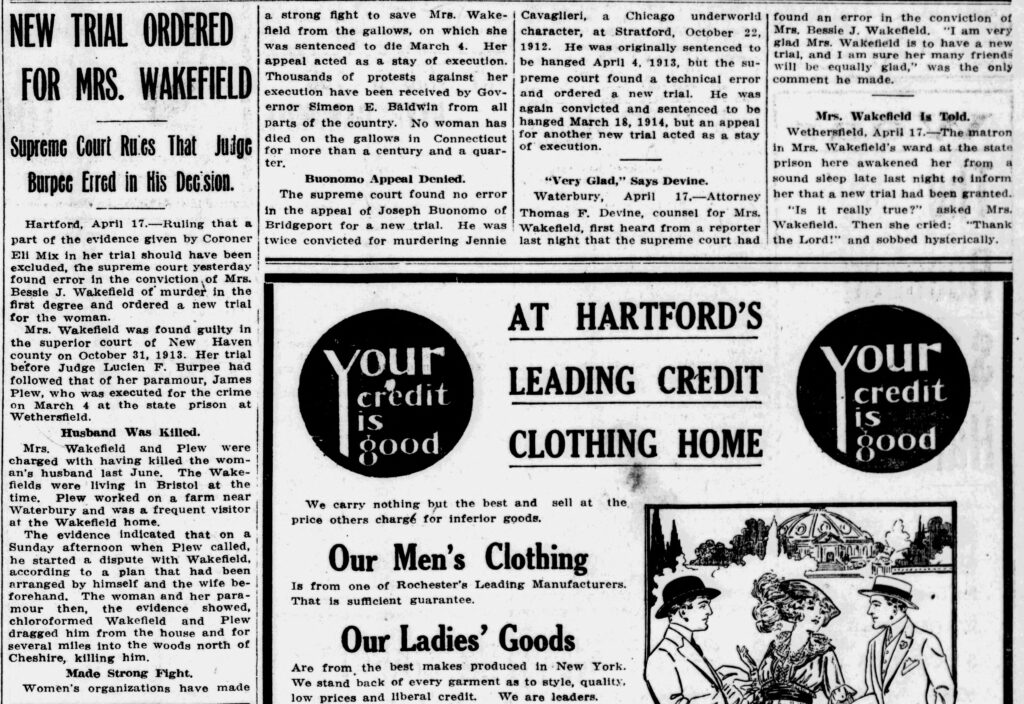 During the second trial, many of Wakefield’s female supporters were in attendance. Despite her denials, she was found guilty of murder, this time in the second degree, which came with the punishment of life in prison. After serving 19 years in prison and after many appeals to the Board of Pardons, Wakefield was finally granted a pardon in 1933. Her case remains notable today for the debate it sparked within Connecticut suffrage organizations during their campaign for women’s suffrage.