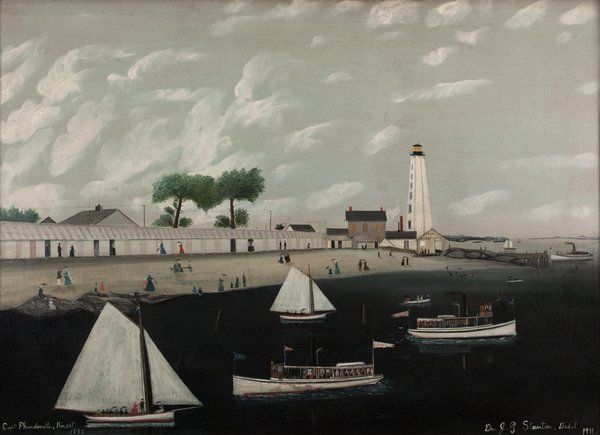 On August 2, 1883, the Stafford Springs Press carried a news article extolling the pleasures of Osprey Beach.  The summer resort was located on the west side of the mouth of the Thames River and said to be graced with broad pavilions from which one could view the “magnificent panorama of the river and sound, and all kinds of sail craft, near and far.”  A oil painting, “Osprey Beach” (1881-1911) by the artist William Gooding and currently held by the Lyman Allyn Art Museum suggests the sort of view held in such esteem.

The Osprey Beach resort, in operation from 1881-1885, was the destination for one-day summer excursions for many organizations and clubs.  It was said to be accessible by carriage and steamer, but accounts in historic digitized state newspapers suggest that the steamer excursion from coastal ports was mostly widely advertised and often the stuff of local news.

In 1882, for example, the excursion of the Veteran Firemen of New Haven to Osprey Beach on the steamer Elm City was described in detail in the Morning Journal and Courier.  One hundred and twenty-five passengers were comfortably cared for, with a lucky few having snagging rare state rooms for a premium $5 to $10.  Some partook in music and dancing on the lower deck, while others stationed themselves on the saloon deck.  Upon arrival at the Thames, the Elm City briefly sailed up the river to allow passengers to see Fort Trumbull and the United States school ship, then, returned to Osprey Beach. On the return trip, speeches and reports by association officers were delivered on deck.  Social and local news of steamer excursions to the resort seem to be a regular feature of the summer journalism. 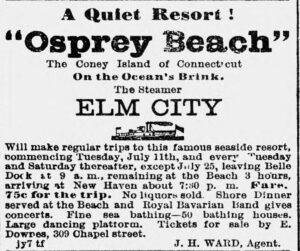 It seems that unaffiliated beach goers were accommodated by regular twice-weekly runs by the Elm City, which left Belle Dock in New Haven at 9 a.m. and returned at 7:30 pm, the round trip costing 75 cents.  In 1883, the proprietors advertised an expansion of the facilities beyond pavilions, “elegant” bathhouses, dance and dining halls that included “Flying Horses! Patent Swings! Bowling Alley! Photo Gallery.” 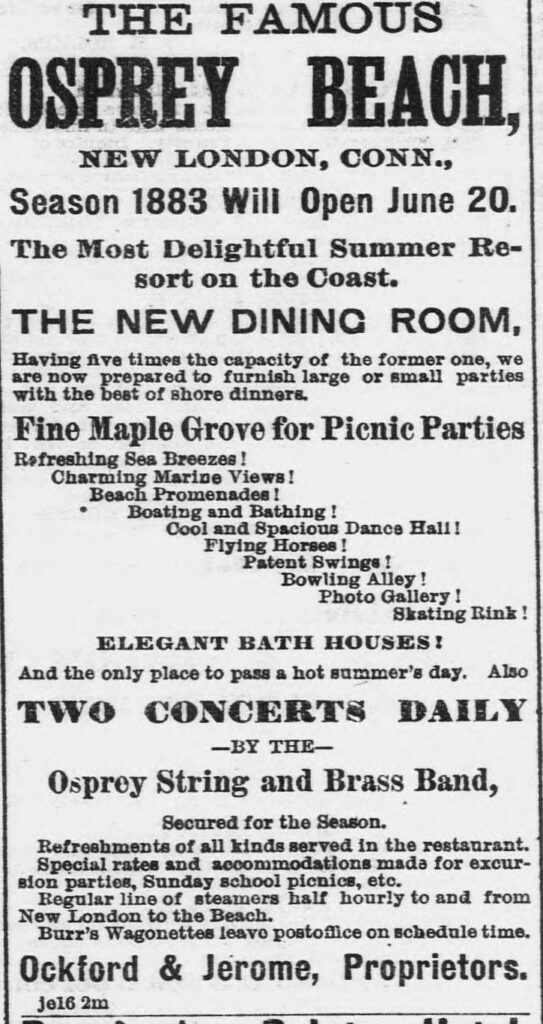 According to the curators at the Lyman Allyn Art Museum, the resort was razed in 1885 but then later opened as a beach for town residents in 1888.