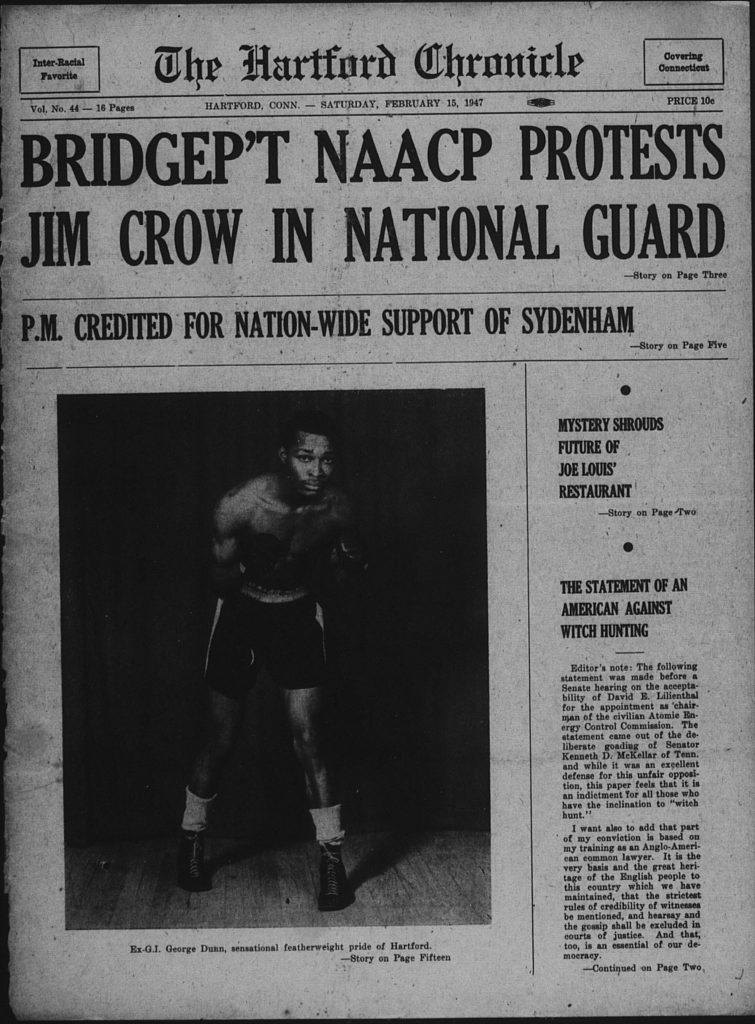 On March 26, 1949, Editor Ernie Durham and President George W. Goodman of the Hartford-based New England Bulletin, an African-American newspaper, declared that their new weekly would uphold “the crusade tradition” of its predecessors. The Hartford Chronicle and the Connecticut Chronicle, they said, had contributed to six critical World War II-era civil rights victories for the African American community in Connecticut.

First, militant journalistic campaigning contributed to the hiring of the first six African Americans in the Hartford Fire Department. Second, the weekly Chronicle played a central role in forcing Connecticut to outlaw bias in the National Guard. Third, investigative reports exposed the substandard housing, inferior goods on sale, and especially high prices in Hartford’s North End neighborhood. Fourth, the Chronicle led an exemplary effort to defend the injured school maintenance man Jacob Becker, who had unjustly been declared ineligible for pension or social security benefits. Fifth, by publishing the impressive credentials of African Americans applying to drive city buses and defending their qualifications, the paper ensured the integration of the profession. Finally, the Chronicle broke with a tradition of partisan Republican Party politics in the African-American press, and endorsed the Democrat Chester Bowles for governor (1949-51).

In later years, the New England Bulletin took on the issues of discrimination in housing, insurance, and public accommodations, including school trips from Connecticut to Washington, D.C., in which black students were denied access to “white” hotels in the capital.  The newspaper anchored its analysis with the results of regular surveys of the residents of key African American communities in Hartford.

The Hartford Chronicle family of newspapers began in 1940 with the Hartford-Springfield Chronicle, a weekly published in nearby Springfield, Massachusetts, by the Square Deal Publishing Company. Square Deal was the publishing house of the historically important Boston Chronicle [LCCN: sn86058056], an African American newspaper founded by West Indian immigrants. The Hartford-Springfield Chronicle was succeeded, first, by the Hartford Chronicle, and then, by the Connecticut Chronicle, both of which covered Hartford, other Connecticut towns, and nearby cities in Massachusetts and Rhode Island. The two titles were distinguished not only by their civil rights crusades but by the degree to which they showcased nationally recognized African American columnists and political cartoonists. In addition, the Hartford Chronicle and Connecticut Chronicle carried informed editorial opinion on all of the topics that impacted the postwar black community. These included the needs of veterans, the fight to retain price controls, the effort to mobilize Fair Employment Practice Committees, the growth of racial violence as exhibited in the Columbia, Tennessee race riot of 1946, and the pioneering Connecticut state agency for civil rights, the Inter-racial Commission.

At the same time, each weekly issue included stories by correspondents based in Waterbury, New Haven, Middletown, Bridgeport, Stamford, and other Connecticut towns, each of whom wrote on the social, cultural, sports, entrepreneurial, and educational accomplishments of the state’s African American community. Biographical details of key African American figures in journalism, civil rights, church life, music, theater, radio, the unions, and community organizing are found throughout all four titles in the newspaper family. Given the obstacles faced by African American publishers, each newspaper had a relatively short life, but together they form a rich resource on the history of the African American community in Connecticut and the region.