In 1915, Booker T. Washington, the so-called “Wizard of Tuskegee” gave his last public talk while on tour in Connecticut. This was not Washington’s first time in Connecticut. Over the course of his career, from New Haven to Norwich, Washington had tread many roads throughout the North, and this state in particular. His pursuit, as always, was to secure funding for the Tuskegee Institute, of which he was president; he also spoke more broadly for the cause of black education in the South.

In previous decades, Washington—and other figures associated with historically black schools and colleges in the South—had developed a strong relationship with Connecticut’s industrialists. In many ways, they were building on pre-existing networks. As historians of recent decades have increasingly acknowledged, the textile and other manufacturing businesses of Connecticut and the rest of the northeast had a symbiotic relationship to the people—free and enslaved—of the South. During the antebellum period, the water-power cotton mills in the North had been fueled by product extracted from the land by enslaved persons. After the Civil War, this relationship changed, in part because of new technology in the North but largely because of the collapse of the southern slave economy. 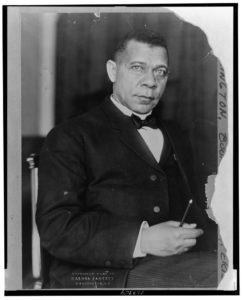 Though there would be important regional differences, the end of the Civil War marked the beginning of another social revolution. From the mid-nineteenth century into the early twentieth century, the ways that people worked the land, earned an education, and sold their time were irrevocably altered. This was especially true in terms of work training and higher education. From the rise of land-grant colleges (starting in 1862) to industrial training schools, access to educational institutions expanded greatly, if unevenly, among many social groups living within the United States. Whereas many state-based schools were for farmers, such as Storrs Agricultural School in Connecticut, institutes established for and among freedmen and freedwomen in the South, including Hampton Institute in Hampton, Virginia (which trained Washington) focused on “industrial training.” This latter system of education was designed to impart skills freedmen and women would need to move into the world of manufacturing or other workplaces.

This change solidified, rather than ended the region’s ties to the industrial North as capitalists were investing in a system of free black education through contacts with figures such as Washington. One of the earliest funds created to support this training was established by Connecticut resident John F. Slater, whose family had a long and rich connection to industry starting with Slater Mill in Pawtucket, Rhode Island. Starting in the 1880s, money earned from the cotton economy would go back to the South, this time to educate formerly enslaved persons. The financial investments of the Slater Fund were tremendous, but this generosity was only possible because of the labor that had created the cotton boom over the past century.

In the early twentieth century, while some industrial jobs migrated south, Connecticut and other northern states developed a system of trade schools to serve their own changing workforces. In industrialized areas, manufacturer support for northern trade schools was often met with suspicion by organized labor. In the South, too, the system symbolized by Washington and others came under increased scrutiny and in the 1920s, outright backlash.

This guide will aid researchers in following these interrelated phenomena from the start of the Industrial Revolution through the development of industrial schools like Tuskegee in the South and state trade schools for inexperienced workers in the North to the end of World War One.

1793: Along with the manufacturing firm of Almy and Brown, English immigrant Samuel Slater invents the technology for the first water-powered cotton-spinning factory in the newly formed United States in Pawtucket, Rhode Island

1794: Eli Whitney patents the cotton gin shortly after completing his degree at Yale University in New Haven, Connecticut; according to many historians, this invention greatly expands the slave plantation economy in the US, particularly with regards to cotton

1823: Samuel Slater and his brother, John Slater, expand their business ventures from Rhode Island into Connecticut, buying the Jewett City Manufacturing Company in Jewett City, Connecticut (this enterprise will become the Slater Company)

1856: Booker T. Washington is born in Virginia; he will later become a free person and receive an education at the Hampton Institute (now Hampton University)

1865: The Civil War ends and the Freedmen’s Bureau is established to facilitate Reconstruction efforts, including schools

1881: Storrs Agricultural School is established in Storrs, Connecticut; this will become the land-grant college for the state of Connecticut

1882: The John F. Slater Fund is created to further the education of freedmen in the South

1886: The Slater Museum is built as part of the Norwich Free Academy campus; William A. Slater commissioned this space to honor his father John F. Slater

1906: In Connecticut, the Board of Education’s Special Commission on Vocational Education report on trade schools is released; a few years later, the Trade School Act of 1909 creates a model for other states to create funding sources for vocational or trade-based education

Bederman, Gail. Manliness and Civilization: A Cultural History of Gender and Race in the United States, 1880-1917. Chicago: University of Chicago Press, 1995.

Fitzsimmons, Gray. “The Slaters of Rhode Island and the Rise and Fall of American Textiles,” in Landscape of History: An Industrial History of the Blackstone Valley. Lebanon: University Press of New England, 2009.

McGerr, Michael. A Fierce Discontent: The Rise and Fall of the Progressive Movement in America, 1870-1920. New York: Oxford University Press, 2003.

N.B.: The Annual Reports of the John F. Slater Fund are available on Hathi Trust.

To learn more about the legacy of Reconstruction and what people in Connecticut read about race and the South, start with “Booker T. Washington.” Terms such as “negro” or “negro race” will also enable a more focused search on perceptions of race with regards to African Americans.

All of these keywords will yield considerable results for Norwich-based articles. This is due to the historical connection of the John F. Slater fund, founded by a Norwich based family, and the philanthropic efforts for black education in the South.  For more information on that specific initiative, avoid searching for “John F. Slater fund”—these words will not return very many results. With that said, various combinations related to “Slater fund” will reveal just how many different philanthropic efforts this family became involved with over time in Connecticut.

For articles related to industrial education, try using those terms (“industrial education”) or “trade school.” Particularly when perusing articles from around the time of World War I, researchers will find that local people had a keen interest—and some anxieties about—adapting European methods for modern education.