The United States mobilized quickly after President Woodrow Wilson declared war on Germany on April 2, 1917. Troops travelled to the front with the help of massive mobilization efforts to provide weapons, food, and books. The Library War Service, formed by the Library of Congress and the American Library Association (ALA), created a national system to collect and distribute books to troops at home and abroad during and after the war. Between 1917 and 1920, the Library War Service distributed approximately 7-10 million books and magazines. The Service built 36 camp libraries to incorporate reading into daily life, and provided library collections to over 500 locations, including military hospitals. 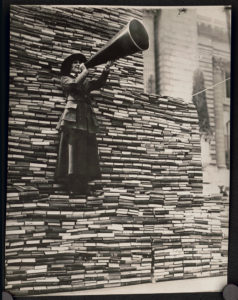 The Library War Service was originally coordinated under the leadership of the Commission on Training Camp Activities (CTCA), an arm of the War Department that managed work by government approved aid organizations. The American Library Association, an approved aid organization, created the Library War Service initially to provide books that would help men in their training, teaching war tactics and weapons use, for example. As historian Nancy Bristow notes, it also fit the broader goal of the CTCA to keep American men “physically healthy and morally pure, free of the traditional degradation of training camp culture.” Progressive reformers approached the war as a chance to use state power to achieve progressive goals through the work of private individuals and organizations. In 1916, YMCA workers travelled to the Mexican border where American troops conducted border patrols. Reformers were horrified by the rampant gambling, prostitution and drinking they witnessed there. Determined to use books to combat this immorality in the war, librarians used books as a moral form of recreation, and a progressive means of reform. Through the books librarians provided soldiers, librarians could re-form them into Americans who reflected progressive goals of morality, social hygiene and efficiency, and in so doing, help the war effort. “This war must not be a war of destruction only,” the War Library Bulletin reported. “It must be carried on constructively as well. The result must be a net gain to humanity. Our fighting men must receive during inevitable leisure hours in training and service the humanizing, helpful effects of good reading.”

At its annual meeting in April of 1917, the Library War Service formed and appointed leaders in each state to oversee the collection of books to distribute to soldiers. The ALA would purchase the rest of the necessary books and build libraries in camps from funds donated by the public through a subscription campaign, and from funds donated by the Carnegie Cooperation. Each state would appoint a contact person at its state library in charge of coordinating book donations and fundraising. Caroline Hewins, librarian at Hartford Public Library and Secretary of the Connecticut Public Library Campaign, served as chairman of the Connecticut Library War Service. A pioneer in children’s librarianship, she lived in a settlement house in the years before the war, and her politics reflected a progressive vision that those working in the Library War Service shared. She reported Connecticut’s donations and Library War Service work throughout the war, largely in articles published in the Hartford Courant.

Connecticut newspapers reported on Library War Service work in the state throughout the war. Focusing mostly on donation and fundraising drives, it revealed the commitment of Connecticut residents to providing books for soldiers. “Almost all of the boys here would rather read than play cards and our most exciting gambling when a book appears [is] to draw straws to see who’ll be second and third and fourth on the waiting list,” the Norwich Bulletin quoted one soldier saying. “Any book will do,” he noted. “Some like novels and, some like histories, and some like books of travel. But in a pinch we’ll find good reading in even an arithmetic or grammar.” Cities across the state contributed books in great numbers. In May 1918, the Bridgeport Times and Evening Farmer reported 100, 418 total donations: Hartford 5, 240 books, New Haven 7,399, Bridgeport 15,000 and Waterbury 25, 411. “One day in March was designated ‘Collection Day,’” the report noted of Waterbury’s book drive, “and an automobile canvass was made of the entire city.”

Some of the books collected for army camps and naval stations were distributed to servicemen in Connecticut. A July 1918 shipment of 3,600 books to New London provided 50 books for each submarine chaser and an allotment to the naval hospital and the troops at New York’s Fort Wright and Fort Michie, located on Long Island Sound.

A majority of the books donated were intended to help soldiers escape the hardships of war, to, in the words of one soldier, “furnish some dreary dugout with a magic carpet.” Beyond escape, books helped men prepare for war, and offered a means of learning the history and language of countries they travelled to at the front. At the end of the war, the War Service also focused on providing vocational books to help men prepare to rejoin the workforce. Beyond educational, recreational, and vocational uses, however, the Library War Service also provided therapeutic reading.

At United States Army General Hospital No. 16 in New Haven, Library War Service librarian Louise Sweet helped treat patients with tuberculosis. There, she assembled a library for their use with special attention to tuberculosis. Specifically, she restricted mystery novels that she believed might cause pulses to rise or increase temperatures, for example. Sweet was a librarian influenced by the war work to believe that books could heal, and that librarians could create a science of its use, eventually called bibliotherapy. Sweet believed strongly in the therapeutic value of the Library War Service. “It is evanescent,” Sweet wrote of the healing power of books, “as are all spiritual values, fluctuating with time, place and mood of the man, and in a tuberculosis hospital the latter is closely involved with the weather. It is a live book that can break through the apathy that enshrouds the bed patients on a rainy day.”

After both sides declared an armistice on November 11, 1918, the Library War Service became part of the Army and Navy departments. The Veterans Bureau, a precursor to the Veterans Administration, also provided service in Veterans hospitals. The Library War Service achieved its progressive goal of using state power to promote social hygiene, efficiency and citizenship through reading. Through its libraries, the Service provided soldiers and sailors with education, recreation, consolation and vocational training to prepare for life after war.

To explore the topic of the Library War Service in online Connecticut newspapers, go to http://chroniclingamerica.loc.gov/, click on the “Advanced Search” tab, select “Connecticut,” select the years “1917-1919,” and enter search terms in the boxes called “with the phrase” or “with ALL the words.” To explore how the Library War Service was covered by papers out of the state, select “All” states.

Caroline Daniels. “The feminine touch has not been wanting”: women librarians at Camp Zachary Taylor, 1917-1919.” Libraries and the Cultural Record. 43.3 (Summer 2008)

McDaniel, W. B. “Bibliotherapy – some historical and contemporary aspects,” Bulletin of the American Library Association 50.9 (October 1956): 584-589.