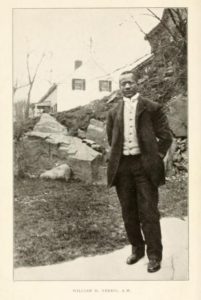 In August of 1922, New Haven-born intellectual and activist William H. Ferris (1874-1941) was elected to travel as a delegate of the Universal Negro Improvement Association (UNIA) to Europe. There he was to petition the League of Nations to designate “three or any one of the former African possessions of Germany as the share of the Negro race in the spoils of the world war” (“Negroes to Ask Land of League of Nations,” New York Herald, Aug. 3, 1922, p. 22). 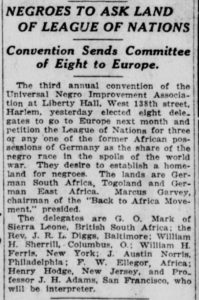 In 1919, Ferris had become Assistant General President of Marcus Garvey’s UNIA and literary editor of the group’s newspaper, The Negro World. His leadership in the Garvey movement was preceded by many years of activity in defense of African American rights. Notices about his lectures over the decades appear in Connecticut historical newspapers.

The New Haven Daily Morning Journal and Courier of September 10, 1898, for example, reports on his appearance alongside Editor J. W. Henderson of the black-owned New England Torchlight, and other prominent African American leaders, at the annual ox-roast of the Bethel African Methodist Episcopal Church. The newspaper described the event in its headline as “Position of the Negro: Prominent Colored Citizens Discuss the Social and Political Position of the Afro-American—Relative Good Done by the Political Parties.” Ferris, then a student at the Harvard Divinity School, staked out his position in the great debate developing between followers of Booker T. Washington and intellectuals like W.E.B. Du Bois.  According to the newspaper account, “Mr. Ferris first criticized the theories of Mr. Booker T. Washington.  .  .  He admitted that Mr. Washington was doing a magnificent work at Tuskegee, but he thought that Mr. Washington made too many concessions to southern prejudice.” In the course of his lecture, he also challenged the Connecticut political parties to catch up with their cohorts in Massachusetts and Rhode Island in meeting African American needs. “New Haven objects to a negro alderman,” he protested, and “Connecticut thinks it has done something wonderful if it has a colored man in the cloakroom at Hartford.”

Ferris was controversial among African American intellectuals in his own time because his philosophy was a mixture of a kind of Black Nationalism and a “racial uplift theory” that associated middle class “Anglo-Saxon” culture and lifestyle with the road to power. This mixture was evident in his main work, The African Abroad, or His Evolution in Western Civilization, Tracing His Development under Caucasian Milieu (1913), and is said to have led to his eventual break with the more radical Du Bois and William Trotter. The African Abroad was essential reading, however, and graciously received by George Godard for the Connecticut State Library. A December 26, 1913 letter from Ferris to Godard, thanking him for his acceptance of the book and alluding to Godard’s interest in the African American educator John J. Smallwood, is bound with the original copy on the State Library shelves. 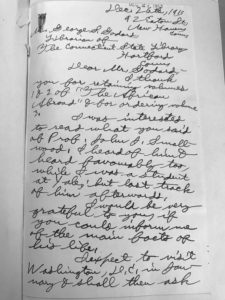 Page one of a letter sent by William H. Ferris to George Godard on December 26, 1913. 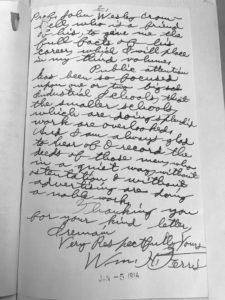 Page two of a letter sent by William H. Ferris to George Godard on December 26, 1913.

William H. Ferris is just one of many African American lecturers whose talks are described in the historical state newspapers placed in Chronicling America by the Connecticut Digital Newspaper Project. Each of these figures, who interpreted national and local events for Connecticut residents, deserves to be researched fully for coming generations.