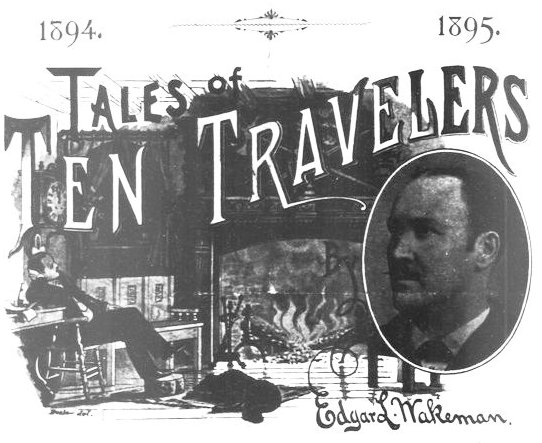 From Advertisement for Tales of Ten Travelers by Edgar L. Wakeman, c. 1902.

“’Struther Kannock’s Halloween” was “No. 43” in a broader collection called Tales of Ten Travelers.  The author, Edgar L. Wakeman, was a prolific journalist and story teller whose http://<http://chroniclingamerica.loc.gov/lccn/sn84020358/1894-10-27/ed-1/seq-3/>works of travel and fiction were carried by many late nineteenth century American newspapers.  Of this particular tale, one reviewer said “Never were the hideousness and almost hopelessness of avarice and greed more masterfully presented.  .  .  “Another lauded “Its searching human analysis” and “pure character drawing.” (Advertisement for Tales, Roosevelt Center).   What do you think? 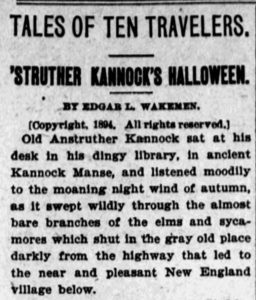 “Edgar L. Wakeman, Biography of Edgar L. Wakeman and an advertisement for his book, Tales of Ten Travelers,” 1902 (?).  Viewed on Oct. 20, 2017 at the website of the Theodore Roosevelt Center at Dickinson University at http://m.theodorerooseveltcenter.org/Advanced-Search?r=1&st1=5&t1=%22Wakeman%2C%20Edgar%20L.%22&v=expanded,