The Fishing Season’s On 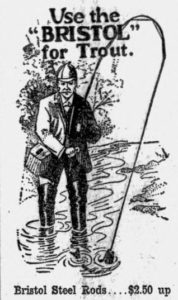 This ad from more than a century ago in the New Haven Daily Morning Journal and Courier reminds me of my grandfather, who LOVED to go fishing.  At the time of the ad’s publication, he would have been twelve or thirteen years old and was likely already an avid angler.  He worked hard to teach his children and grandchildren the pleasures of fishing.  At the cottage he and Nana rented every summer he would get up at 4:00 am to fish and come quickly back with fish for dinner.  But he never failed, at seven or eight a.m., to go back out on the lake with my sister and I.  Though we never caught fish that we could keep, the memories, as I am sure he anticipated, became priceless.

On March 29 of this year, CT DEEP announced that trout stocking was well underway for the April 8, 2017 Opening Day and that by the season’s end, 530,000 catchable-size trout will have been released into Connecticut’s lakes, ponds, rivers, and streams.  Connecticut began taking responsibility for replenishing the food fish stocks as early as 1867 and a 1906 report found in the state library documents just how robust the effort to stock trout was over 11 decades ago when this ad was printed.  To get more information about this year’s season, take a look at the DEEP report on where you will find, and not find, the fish.  To learn more about the history of the program, see the great reports preserved in the state library.  To get a flavor for the popular culture of fishing season in Connecticut, do some searches in the recently digitized historical newspapers in Chronicling America.

Murphy, Kevin. Fly Fishing in Connecticut. Middletown, Conn., Wesleyan University Press, c2012. CSL call no.: SH477 .M87 2012. Connecticut’ first fish and game laws were passed in 1861 amid concerns about over-fishing and decimation of the fish population in the state (p.5)

Connecticut. State Commissioners of Fisheries and Game. Biennial report of the State Commissioners of Fisheries and Game for the years ending September 30, 1906. Hartford, Conn., R. S. Peck & Co., 1906. State Library call no.: ConnDoc F33 r. Reviews 40 years of “labors for the restoration of fish to the depleted waters of the state” and is particularly concerned with the development of fish hatcheries (p. 5 and on)