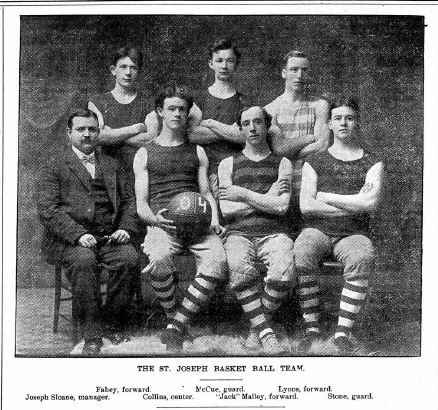 Growing up outside Springfield, MA, the site of the invention of the basketball by the physical education instructor Dr. James Naismith, we were taught at a young age about the history of the sport.  Dr. James Naismith began training athletes using a peach basket and a soccer-type ball in 1891 at the Springfield YMCA and I’ve taken a few shots myself into the peach basket at the Basketball Hall of Fame.  Now 100+ years later basketball and especially NCAA basketball’s iconic March Madness or “The big dance” is in full swing.  The tournament was created in 1939, the year Naismith died.  The winner of the first tournament was the University of Oregon, who beat The Ohio State University by 46-33.

The Norwich Bulletin reported in December 1916 that “It was not until ten years after its invention that the game was given much recognition by the colleges.  In 1901-02 the first intercollegiate league was formed in the east…” and “In 1905 the western conference organized its league.”  Sol Metzger noted in his December 19, 1916 Norwich Bulletin article that Yale looked particularly strong that season.  In Don Harrison’s book, Hoops in Connecticut, it is noted that the first intercollegiate game was played December 10, 1896 in New Haven between Wesleyan and Yale, with Wesleyan inching out the win by a score of 4-3.

In March 1904, The Thompsonville Press reported that the St. Joseph basket ball team was “The fastest, grittiest and best team of their weight in the country” and that the “fastest professional teams have tasted defeat at the hands of the St. Joe team…” 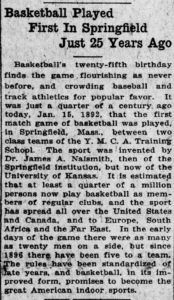 And finally 100 years ago in January of 1917, the Bridgeport Evening Farmer reported that “Basketball’s twenty-fifth birthday finds the game flourishing as never before, and crowding baseball and track athletics for popular favor.  It was just a quarter of a century ago today, Jan. 15, 1892, that the first match game of basketball was ever played…” and that “…basketball, in its improved form, promises to become the great American indoor sport.”

Get your brackets ready and enjoy the madness!