And, Yes, the Cherry Tree 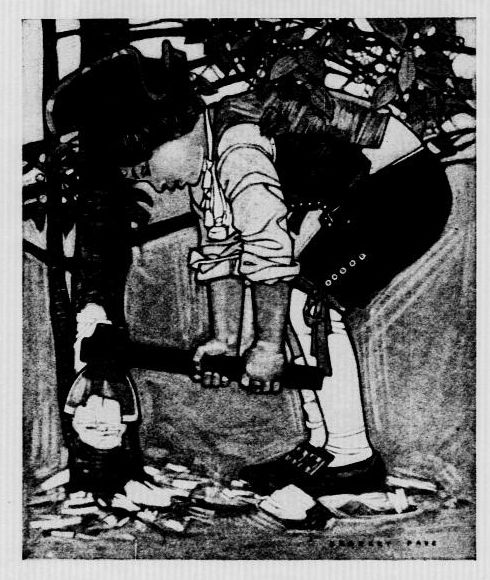 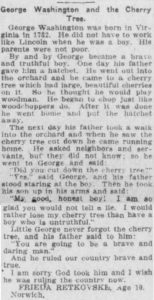 In February 1913, in “That Cherry Tree,” the wit Edgar Allen Forbes took great delight in poking fun at the George Washington biographer who had crafted this morality tale more than one hundred years earlier.  In the new century, adults were clearly encouraged to laugh at the literary pretensions of the first president’s biographer, but educators still prevailed upon children to absorb its intended lesson about the results of honesty.Every time George Washington’s birthday rolled around, it seems, the Boys and Girls Department of the Norwich Bulletin solicited and published the musings of school children on the cherry tree anecdote.

On Feb. 22, 1912, ten-year old Bridge School District student Frieda Retkovske, the daughter of a woolen spinner who was regularly listed for perfect attendance at school, re-tells the story in a most earnest way. In her recounting, when George confessed to his crime, his father “took his son up in his arms and said: ‘My good, honest boy!” Naturally, she concludes, “he ruled our country brave and true” (Norwich Bulletin, February 22, 1922).

Writing in 1911, twelve year-old Walter Hyde of Norwich Town seems a little savvier about the ways of adults.  “If he hadn’t cut down that cherry tree what stories would mothers tell their children to teach them about honesty?” he wrote in his contribution to the children’s page. 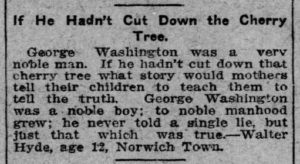 Walter was right. The cherry tree story was created by biographer Mason Locke Weems in 1800 and was included in William Holmes McGuffey’s popular grammar school textbooks, which were published from 1836 till the early 20th century. Both men were ministers who “believed that the best way to improve the moral fiber of society was to educate children” and McGuffey “was passionate about teaching morality and religion to children” (Richardson).

To explore the topic of George Washington’s Birthday celebrations and the uses and abuses of the cherry tree story in online historic newspapers, go to Chronicling America, click on the “Advanced Search” tab, and enter these terms into the search boxes: