Every summer, National Guard units all across the US have two weeks of field training at a military reservation, located, typically, in their home state. The Connecticut National Guard (CNG) trains at the state’s Camp Niantic, but from time to time the CNG joins National Guard units from other states for training at a larger camp outside Connecticut.  In July 1908, the CNG Second Regiment had their summer training at a brand new site in upstate New York that was known as Pine Camp (currently the site of the US Army’s Fort Drum).  In fact, Pine Camp was so new it had become an official National Guard training site only a few weeks before the CNG arrived.  The nearby Lake Ontario port of Sackets Harbor, a site near the mouth of the St. Lawrence, had been an important site for encampments since the war with the British in 1812.  Nearly 100 years later, in the spring of 1908, Brigadier General Frederick D. Grant, the eldest son of Ulysses S. Grant, decided that the adjacent territory at Pine Plains would be an ideal place to train troops.  Funds were appropriated to purchase the land, the camp formally opened on June 11, 1908, and summer training became an annual event at Pine Camp. 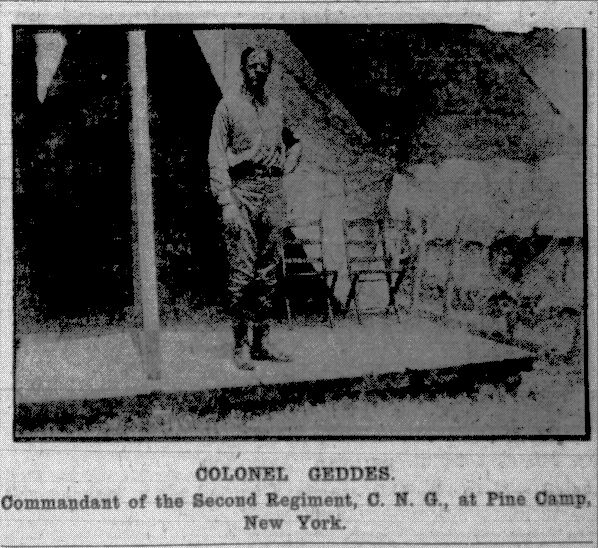 When the Second Regiment of the Connecticut National Guard embarked on the 14-hour journey to Pine Camp in the summer of that first year, the New Haven Morning Journal-Courier began to treat the affair as feature news.  In part, this was because Pine Camp was largely unknown to the people of Connecticut and the troops were apprehensive.  Contributing to the general anxiety were horror stories told about a previous guard encampment at Manassas, Virginia, where extreme hardship had reportedly led to older men dropping out of the guard.

Families and friends in Connecticut were concerned that their men were going to face a near wilderness landscape and harsh weather, with only tents for shelter.  On July 9, the Journal-Courier began its report by saying, “Sweethearts, wives,and mothers, who have been haunted by the fear that the United States government would probably kill off a large number of the boys in Companies C, D, E, and F of this city, by murderously hard work and poor accommodations at Pine Camp, may cease their worry.”  They were reassured over and over that the Pine Camp experience was different:

The men are worked hard, on drill and maneuver, but not hard enough to cause suffering. There are no such mistakes as were made at Manassas, when guardsmen were given hikes which made even the regulars wilt.  The nights are cool, which helps much because the camp is hot by day.  The water is splendid, although hardly cool enough to please the palate of the man accustomed to a water cooler in the office.

Cool water was only one of the health measures that were lauded. Wide streets free from flies and odors contributed to “remarkable” sanitary conditions.

A feature article published on July 11 and entitled “Real Joys of a Military Camp,” spent many column inches describing the camaraderie and other pleasures of camp life. All those concerned about the rigors of training were assured that the encampment was more than drilling.

The social side of camp life comes, except for snatches during the day between the drills, after the regimental parade at five o’clock in the afternoon. After mess, it is the custom in many streets for the ambitious songsters to gather in front of one tent of some particular able dispenser of melody and literally make “Rome Howl,” until roll call and taps.  Here and there a candle burning inside a tent may be taken as an indication that a number of lovers of the game have collected for the purpose of engaging in a spirited game of pitch or a few harmless hands of whist.

With the good feeling that exists among the members of the various companies of the Connecticut regiments, there is necessarily quite a little visiting done during the night in various streets, and it is a most decorous guardsman who can say after he has spent a single camp at Niantic that he has never paid a visit to the so-called “Spiritualist Camp,” just the other side of the high board fence that marks one of the boundaries.

No matter how hard the militiamen at Pine Camp may be working this year, there is no doubt but that they are still enjoying the same pranks and the same social pleasures that they always have, for without these, it is safe to say that the interest in the militia of the state would fall off in an alarming degree.

It seems that the last sentence might have reflected a genuine fear that recruitment to the guard might decline. In 1903, the CNG had been called into Waterbury to deal with a trolley strike.  The trolley strike and other labor unrest engendered great fear of civil disturbance on the part of Connecticut legislators.  Between 1903 and 1913, for example, the Connecticut General Assembly bought or built 11 new armories.  So, reports of ‘veteran’ guardsmen refusing to reenlist after the hardships of previous encampments may have been especially alarming. 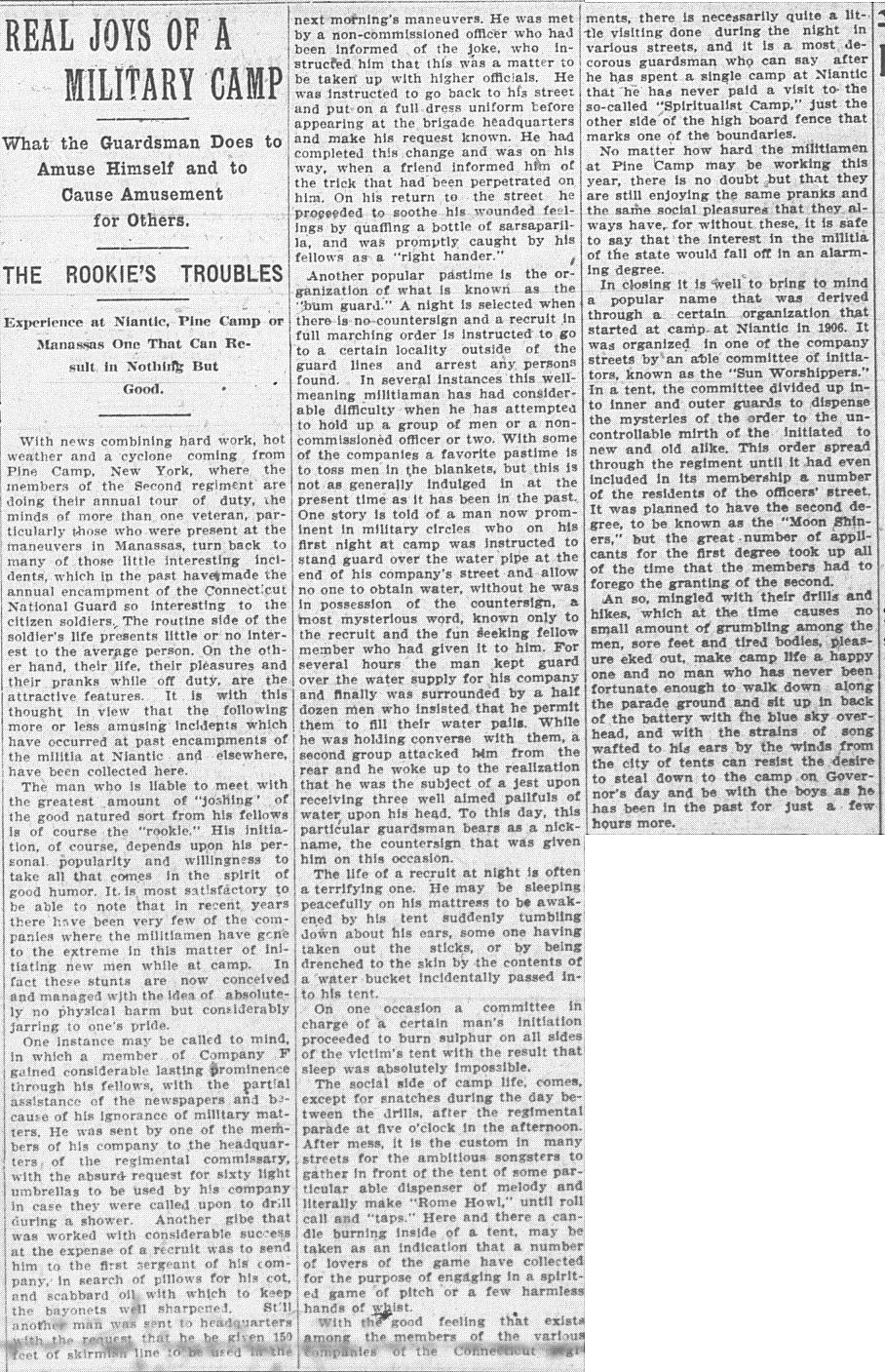 The Journal-Courier’s series of feature articles, which opened up the mysteries of camp life to the public and reminded all of the importance of the CNG was likely in tune with a need felt by other Republican Party institutions to nip this trend in the bud.  Whatever their motivation, the editors have provided a treasure to historians of Connecticut history, who can now easily read these detailed explanations of camp life, learn a great deal about the CNG in its Progressive Era incarnation, and, attempt to read the public mood through the lines.  The Daily Morning Journal-Courier is one of a series of related title Journal and Courier titles (1880-1908) that are currently being digitized for upload into the Library of Congress’s historic newspaper database Chronicling America.  These issues will begin to appear there sometime this fall.

“Real Joys of a Military Camp: What the Guardsman Does to Amuse Himself and to Cause Amusement for Others,” Daily Morning Journal-Courier, July 11, 1908, p.5, col. 4,5,and 6.