On Memorial Day one hundred years ago today, the Howland Dry Goods Co. of Bridgeport chose to use their advertising space in the Bridgeport Evening Farmer to publish this commentary on the Great War in Europe.

“The Optimist” was one Leigh Mitchell Hodges, a Philadelphia journalist and author of religious but non-sectarian books of inspiration that were decorative in the manner of a nineteenth century gift book or keepsake book.   It is perhaps not surprising that the advertisers for Howland Dry Goods chose the musings of Hodges for their contribution to Bridgeport’s remembering on Memorial Day in 1916.  Hodges would have been well-known as the author of a substantial homage to the most pre-eminent department store merchants of the day, the owners of the Wanamaker store in his hometown of Philadelphia.  Department store advertising was becoming an important financial endeavor (Printer’s Ink) and the Wanamaker’s Stores were the pioneers in advertising for this kind of retail venture.  In Hodge’s text,  they were also portrayed as leaders who made the department store a center of education, a paragon of merchandising morality, and a most democratic purveyor of abundance to those not in the elite layers of society.  Part of their method was to jettison haggling and to set firm prices—the same for the rich and the rising middle class—and to show themselves above deception in their promotions (Appel).

The Bridgeport-based Howland Dry Goods Co. seems to have chosen to emulate Wanamakers in their self-presentation, emphasizing their honest advertising and democratic approach to the customer (House-warming).  In publishing Hodge’s inspirational text, they also aligned themselves specifically with Wanamaker’s effort to identify these practices with Protestant morality (Lears, p. 205).  They clearly also assumed that their middle class clientele approached Memorial Day in 1916 with increasing dread about the war about to engulf them and their sons and husbands.  The Howland Dry Goods Co. was founded by John G. Howland, whose titles also included president of the Smith-Murray Co., director of the First Bridgeport National Bank, trustee of the Y.M.C.A., and trustee of the Bridgeport Protestant Orphan Asylum. 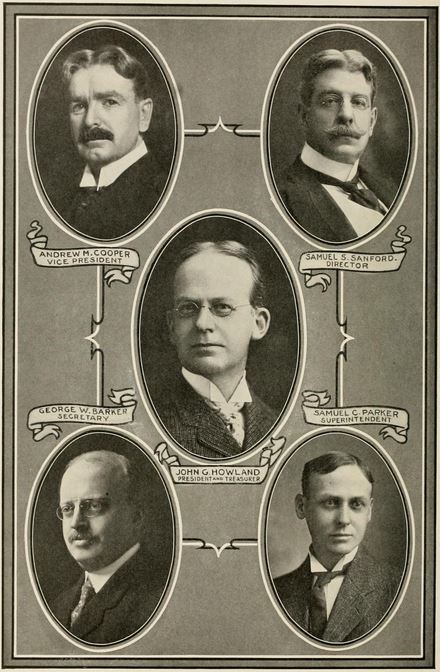 Printer’s Ink: A Journal for Advertisers, September 7, 1904, page 1.  Accessed on April 20, 2016 at https://books.google.com/books?id=798hAQAAMAAJ&printsec=frontcover&source=gbs_ge_summary_r&cad=0#v=onepage&q=department%20stores&f=false.