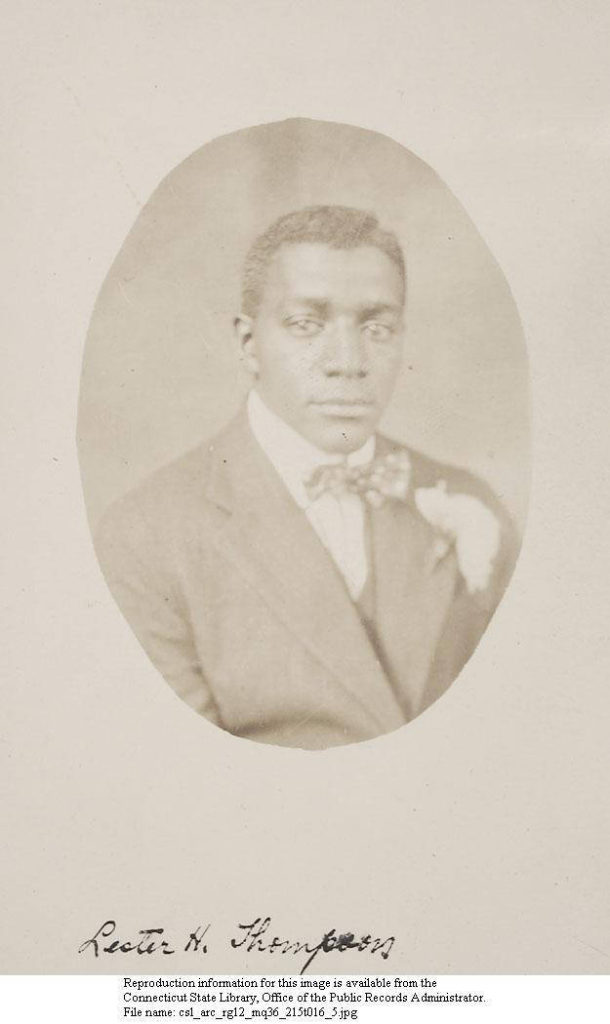 Lester H. Thompson, a Connecticut soldier from New Haven, lost his life shortly after arriving in France in 1918. His parents thought “he caught a cold on the transport” and that it later developed into the pneumonia that killed him (Times-Leader of New Haven, Nov. 13, 1918, p.18). Thompson left New Haven for the Army on July 31st, 1918, was sent, first, to Camp Devens, and then to Camp Dix, where he was assigned to Company E of the 807 Pioneer Regiment. He was in France by Sept. 4th and died on Oct. 15th, 1918. It seems likely that Thompson did not have the common cold, but influenza.

Connecticut newspapers did not make a big deal of it when influenza first became epidemic in 1918. Flu epidemics broke out every year or so, posing the greatest risk to the very young and the sick or the old. On Aug. 17, 1918, the Norwich Bulletin printed the frivolous-sounding advice from the New York City Department of Health to “Kiss through Handkerchief To Avoid The Influenza” (p.1, column 2).

But this epidemic, which first appeared in the military camps and then spread to the civilian population, was especially lethal if it turned into pneumonia. And, the epidemic of September-October 1918 posed the greatest risk to those between the ages of 20 and 40. The cause for this is still “something of a mystery” (Gillette. Army Medical Department, 1917-1941 (2009) p. 171). This was a particularly virulent strain of influenza, there were no effective vaccines and the overcrowding of the army mobilization camps and transport ships allowed communicable diseases to spread rapidly.

On Sept. 12, the Norwich Bulletin reported an influenza outbreak at the New London submarine base and on Sept. 14th, it reported that an “Epidemic of Grip Strikes the City” (p.5, column 4). Grip or grippe was a common name for influenza. The article contained advice on how to avoid or treat influenza from local Health Dept. officials, who still saw this as a common epidemic. “With this disease the fever is higher and although the disease is persistent if care is taken it leaves the patient very suddenly.”

A week and a half later, the Norwich Health officer was optimistic because there were fewer new cases reported and said it would not be necessary to close the Norwich schools. (“Influenza Epidemic On The Wane” Norwich Bulletin Sept. 25, 1918 p. 5).

But the epidemic spread and hit many communities hard. City and state health officials took a variety of steps to control the spread of the disease, chiefly by trying to reduce contact between the sick and the healthy. In New London, it was announced that “All theaters, churches, schools and meeting places of all kinds except saloons are closed by order of the health board …” (“Drastic orders issued in New London” Norwich Bulletin, Sept. 27, 1918 p. 5, column 5). On the same page are other items related to the epidemic including “Extends Order to Close Dance Halls” (column 1), “Connecticut College Put Under Quarantine” (column 4) and “Shortage of Help Cuts Trolley Service” (column 4) along with some death notices for victims of the epidemic. 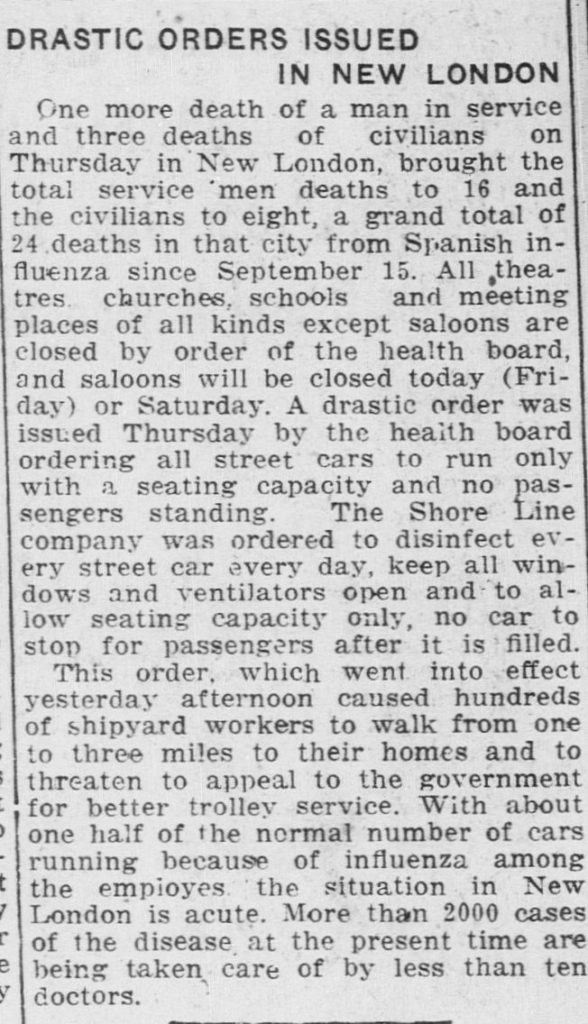 But even with a plan in place, Bridgeport needed more volunteer nurses. “The situation has become drastic” the Bridgeport Times and Evening Farmer said in a call to “Volunteer Now! More Nurses Needed” (Oct. 18, 1918 p.17) and in an editorial saying that “of the seven hundred women in Bridgeport who took instruction in nursing there should be some who are willing to respond to the city’s call for nurses.” (“Call to Valor” Oct. 18, 1918 p. 6)

The worst of the epidemic ran from September through October. The Report of the State Department of Health for 1919/1920 found that 30% to 40% of the population had influenza of more or less severity and that 56% of deaths from September to October 1918 were from influenza and pneumonia. “The greater number of deaths from influenza was not due primarily to the influenza virus, but rather to the succeeding pneumonia that was a complication in many of the cases” (p.276).

The human toll of the influenza epidemic can also be found in the newspapers. Their columns are full of obituaries and death notices of soldiers, sailors, working men and women, nurses, doctors, fathers, mothers, children and persons from all walks of life who caught influenza, developed complications and died.

Dr. John T. Black, Commissioner of the State Department of Health, feared that the loss of these young people could have an impact on the future of the state. In 1919 he wrote that the epidemic’s

“sinister characteristic was that it took the strong and the ab[le]. It took the potential fathers and mothers. Passing lightly the very young and almost ignoring the old, it aimed straight at the very flower of the flock. … The sum of the dead, ghastly as it is in a human way, and devastating as it is in an economic way, is negligible in the lime of [the] state compared to the effect of influenza on our future birth rate” (“Influenza First From New London” Norwich Bulletin July 11, 1919 p.7)

Further study is needed to know whether Dr. Black’s fear was realized.

Lester Herbert Thompson was survived by his father, William and mother, Ida Eaton Thompson, a brother Jasper N. and a sister, Mrs. Ida T. Hicks. His obituary says he “was a popular and well known youth and a general favorite with the colored community” of New Haven. He was 25 years old.

In his response to the 1917 Connecticut military census Thompson said he was a chauffeur and electrician, he could handle a team [of horses], could drive an automobile, ride a motorcycle, could handle a motor boat and had no serious physical disabilities.

His family erected a headstone for their lost son and brother in Evergreen Cemetery in New Haven. After the war, they provided his picture and information about him for the state’s Military service record, describing him as an auto driver for Mrs. B. Danforth of New Haven.