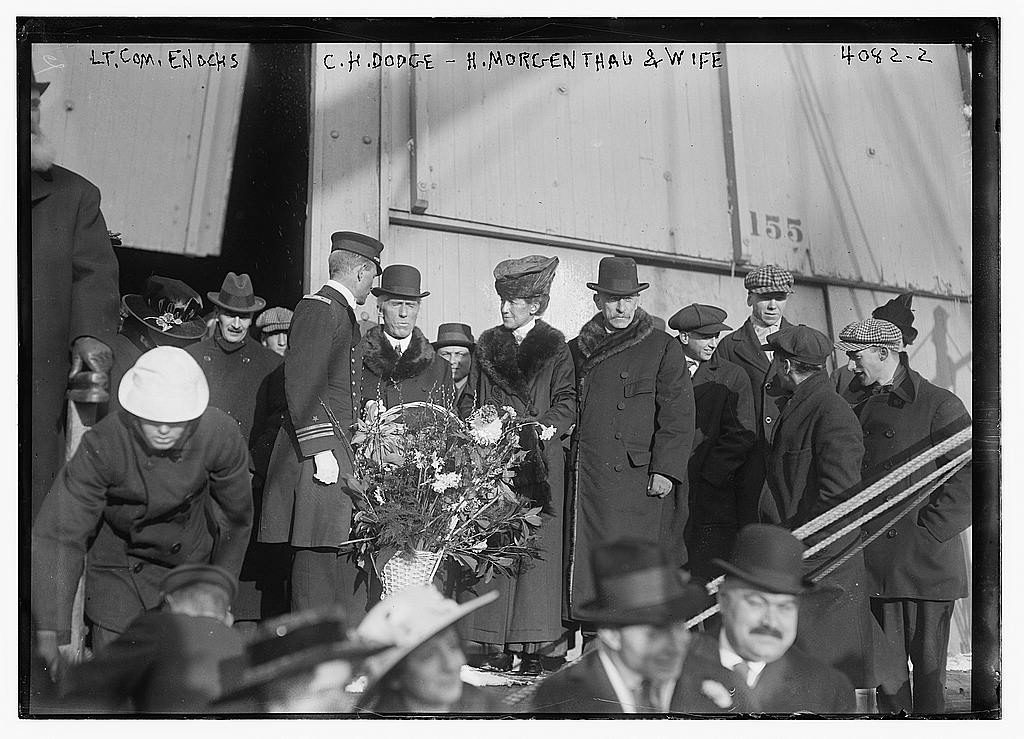 Photograph shows Lt. Commander John Matt Enochs (1878-1932), captain of The Caesar; Cleveland Hoadley Dodge (1860-1926), founder of the American Committee for Armenian and Syrian Relief; Henry Morgenthau (1856-1946), ambassador to the Ottoman Empire (1913 to 1916); and his wife Josephine Sykes Morgenthau. They are gathered at the Caesar which was bringing relief supplies to Armenian and Syria in December 1916. (Source: Flickr Commons project, 2014 and the Rogue River courier, January 16, 1917). Courtesy of the Library of Congress.

The American Committee for Armenian and Syrian Relief (ACASR) was formed in 1915 at the behest of American Ambassador Henry Morgenthau in response to the deportations, massacres, and atrocities committed against Armenians, Assyrians, and Greeks across Anatolia during World War I. While for centuries the Ottoman Empire fostered a multicultural and religiously diverse domain, the advent of the Young Turk government and the pressure of European nationalism would lead to an assertive Ottoman response to ethnic and religious minorities. In conjunction with Ambassador Morgenthau, philanthropic businessman Cleveland H. Dodge and Protestant missionary James L. Barton jointly created ACASR to provide emergency humanitarian aid to suffering minority populations in the Ottoman Empire. The organization was chartered by Congress in 1919 and renamed the Near East Relief (the group briefly operated under “The American Committee for Near East Relief” from 1918-1919). The Committee successfully mobilized the American public toward unprecedented grassroots support of humanitarian efforts in the Near East and embarked on an ambitious nationwide campaign from 1915 to 1930.

Connecticut’s contribution to the national relief campaign was significant in comparison to the state’s size and resources. The state produced one of the highest per capita rates of donation including more than $628,000 for ACASR between 1915 and 1921. The noteworthy efforts of Connecticut residents were acknowledged in a letter from the Committee in Constantinople published in the Bridgeport Times on October 5, 1920, exclaiming: “How you would have rejoiced, to see the fruits of your labor in Connecticut, as I have seen them in Armenia.” In addition to financial support, Connecticut citizens also answered the call to serve in war ravaged regions of the Ottoman Empire. Approximately 69 volunteers went abroad to aid orphans, refugees, and displaced persons in the Levant, Greece, Turkey and Armenia. One notable worker was Christopher C. Thurber, a Norwich native who oversaw the transfer of over 7,000 children to safety following the Great fire of Smyrna which destroyed their homes in 1922. Thurber’s extensive humanitarian work in the region would eventually lead to his position as the Director of Near East Relief (NER) operations in Greece.

The rhetoric employed to motivate communities and individuals in Connecticut to action was often infused with religious language. During the Near East Relief’s Christmas Appeal of 1922, former Governor Marcus Holcomb petitioned Connecticut to give and support orphans “in Biblical lands.” In the Norwich Bulletin, Connecticut’s NER field secretary Rev. Henry Hurlburt recounted his experiences in the Near East and the “barbarous acts of the Turks.” Even a casual reading of the cited articles will reveal that the Near East Relief appealed to anti-Muslim sentiment and long-standing fears of the Ottoman presence in Central Europe to stimulate support for the cause. The platform appealed to America’s religious duty to protect persecuted Christians: “Did you know… That a quarter of a million homeless children, many of them orphaned because their fathers or mothers refuse to denounce the Christian faith, are dependent for life itself upon American philanthropy?” In evoking a mutual faith identity (which does present complex and problematic content for the 21st century reader), the Near East Relief was able to raise and distribute over 116 million dollars and save the lives of over one million refugees, including 132,000 orphans by 1930.

How to Search this Topic in Chronicling America.

To explore the topic of Armenian and Syrian relief in online Connecticut newspapers, go to http://chroniclingamerica.loc.gov/, click on the “Advanced Search” tab, select “Connecticut,” and enter a group of single-word terms in the box called “with ALL these words” and two, or more, word phrases in the box named “with the phrase.”  Hit search.

You can also try using a “proximity search” by entering terms in the box called “with the words” and then choosing just how close in the text these words should be by using the drop down menu to the right.

Watenpaugh, Keith David. Bread from Stones: The Middle East and the Making of Modern Humanitarianism. Oakland: University of California Press, 2015.